Items related to THE AMERICAN PAST, VOLUME I, 4/E

CONLIN THE AMERICAN PAST, VOLUME I, 4/E

THE AMERICAN PAST, VOLUME I, 4/E 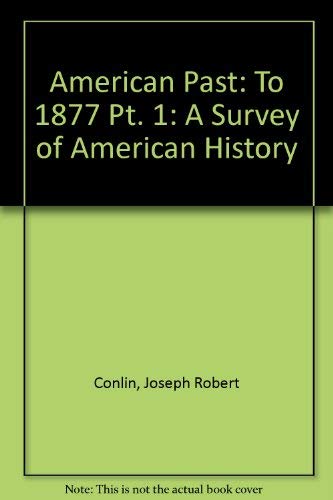 The American Past emphasizes political history, yet provides balanced coverage of social, economic, and cultural events. Conlin's lively, literary narrative captures and keeps student interest. This textbook is appropriate for the American History survey course at both two-year and four-year schools. Features: * The basic production values that are a hallmark of the Harcourt Press keep this classic textbook remarkably affordable. * Conlin presents material in fifty-one manageable chapters, assisting student comprehension. * Each chapter contains one of two recurring boxed features, How They Lived or Notable People. New to this edition: * Expanded coverage of Pre-Columbian America highlights a major revision of the early chapters. * Two chapters in early nineteenth century history have been combined to form a new consolidated chapter on the social and cultural history of the Jacksonian period. * Conlin has thoroughly revised and updated chapters addressing recent history, including adding one new chapter. * The fifth edition includes increased coverage of both native American and environmental history integrated throughout the text.

Joseph Conlin was born in Philadelphia and educated at Villanova University (A.B.) and the University of Wisconsin (M.A., Ph.D). He taught American history at half a dozen colleges and universities, spending most of his career at California State University, Chico. He was a Fulbright Professor in Rome and Salzburg and twice Visiting Senior Lecturer at the Social History Centre at Warwick University, England. For thirty years--sixty semesters--with a few subtracted for sabbaticals, he taught between one and four sections of the United States history survey course each term, a total of about 200 times. He won four awards for excellence in teaching. Conlin has written a dozen books, about seventy articles in scholarly journals and magazines of popular history, some 100 book reviews in a variety of journals, and more newspaper journalism than he can or cares to remember. Several of his published essays and one book were awarded "best of the year" prizes.

"I like that the chapters on war are divided into two - conceptually, this helps students break major events into two bits. The Civil War & WWII are divided chronologically, and WWI is divided by foreign & domestic activity which is nice for a short period of American involvement."

"The opening quotes for each chapter set the tone--a technique I already use to illicit discussion and critical thinking in my classes. Photo captions and sidebars are illuminating and seem to answer the questions students did not realize they needed to ask [e.g. p.464 sidebar on Lady Homesteaders.] They take students into the era rather than keep them as outsiders looking in--a shot of whimsy to lighten the rest of the load."

"I like the organization and the philosophy as I have stated above. I also like the "bite-sized" chapters and the "How They Lived" and "sidebars" within the chapters. Many students have short attention spans. They should not have a problem using this textbook."

"The boxed features in the chapters provide fascinating insights and little known facts for the student. They are a definite strength of this textbook and are real "gems"."

"[Regarding "How They Lived" and sidebar features] I loved them! I looked forward to them. I even made a point to look in other chapters to see what he had included."

Book Description Wadsworth. Paperback. Condition: Fair. A readable copy. All pages are intact, and the cover is intact. Pages can include considerable notes-in pen or highlighter-but the notes cannot obscure the text. At ThriftBooks, our motto is: Read More, Spend Less. Seller Inventory # G0155006142I5N00