Items related to A Brief History of Chinese Civilization

A Brief History of Chinese Civilization 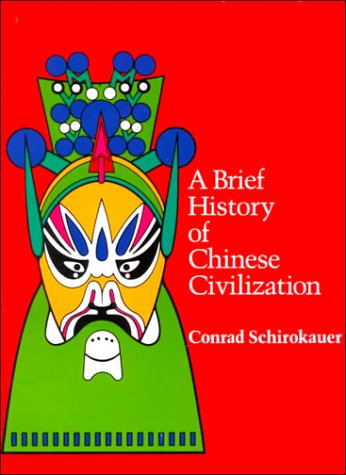 This concise book emphasizes Chinese cultural history while also covering political and economic history. It is introductory in both style and content, and the organization is kept as simple as possible. Brief coverage of each major Chinese dynasty or other discrete period is treated in a separate chapter. Coverage includes recent developments in China, up to and including the massacre at Tiananmen Square. Timelines, charts, or key dates appear at the beginning of chapters. Chinese names are printed in Pinyin with Wade-Giles in parentheses.

Conrad Schirokauer, Senior Scholar and Adjunct Professor at Columbia University and Professor Emeritus at the City University of New York, received his doctorate from Stanford. He has studied in Paris and conducted research in Japan and China. His published papers and articles deal mostly with Song intellectual history. He is co-editor, with Robert Hymes, of ORDERING THE WORLD: APPROACHES TO STATE AND SOCIETY IN SUNG DYNASTY CHINA (Berkeley: University of California Press, 1993). His current research is on Song perceptions of and attitudes toward history. Schirokauer was associated with a New York University summer graduate program for teachers in Japan and China and remains interested in how history is taught and written. As a textbook author, he has published A BRIEF HISTORY OF CHINESE AND JAPANESE CIVILIZATIONS (Second Edition 1989), with separate volumes on China (1990) and Japan (1993), all now available from Wadsworth. Also worth mention, is his translation of CHINA'S EXAMINATION HELL by Miyazaki Ichisada (New Haven: Yale University Press, 1976,1981), which he recommends to any student who feels burdened by examinations.

2. A Brief History of Chinese Civilization