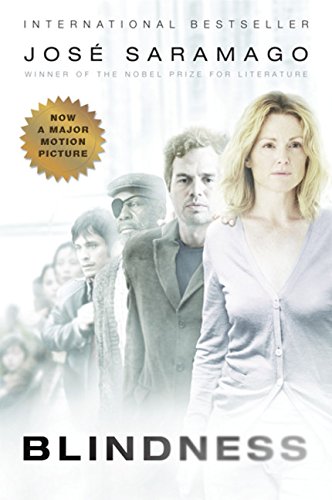 A city is hit by an epidemic of "white blindness" that spares no one. Authorities confine the blind to an empty mental hospital, but there the criminal element holds everyone captive, stealing food rations and assaulting women. There is one eyewitness to this nightmare who guides seven strangers—among them a boy with no mother, a girl with dark glasses, a dog of tears—through the barren streets, and the procession becomes as uncanny as the surroundings are harrowing. A magnificent parable of loss and disorientation and a vivid evocation of the horrors of the twentieth century, Blindness has swept the reading public with its powerful portrayal of man's worst appetites and weaknesses-and man's ultimately exhilarating spirit.

In an unnamed city in an unnamed country, a man sitting in his car waiting for a traffic light to change is suddenly struck blind. But instead of being plunged into darkness, this man sees everything white, as if he "were caught in a mist or had fallen into a milky sea." A Good Samaritan offers to drive him home (and later steals his car); his wife takes him by taxi to a nearby eye clinic where they are ushered past other patients into the doctor's office. Within a day the man's wife, the taxi driver, the doctor and his patients, and the car thief have all succumbed to blindness. As the epidemic spreads, the government panics and begins quarantining victims in an abandoned mental asylum--guarded by soldiers with orders to shoot anyone who tries to escape. So begins Portuguese author José Saramago's gripping story of humanity under siege, written with a dearth of paragraphs, limited punctuation, and embedded dialogue minus either quotation marks or attribution. At first this may seem challenging, but the style actually contributes to the narrative's building tension, and to the reader's involvement.

In this community of blind people there is still one set of functioning eyes: the doctor's wife has affected blindness in order to accompany her husband to the asylum. As the number of victims grows and the asylum becomes overcrowded, systems begin to break down: toilets back up, food deliveries become sporadic; there is no medical treatment for the sick and no proper way to bury the dead. Inevitably, social conventions begin to crumble as well, with one group of blind inmates taking control of the dwindling food supply and using it to exploit the others. Through it all, the doctor's wife does her best to protect her little band of blind charges, eventually leading them out of the hospital and back into the horribly changed landscape of the city.

Blindness is in many ways a horrific novel, detailing as it does the total breakdown in society that follows upon this most unnatural disaster. Saramago takes his characters to the very edge of humanity and then pushes them over the precipice. His people learn to live in inexpressible filth, they commit acts of both unspeakable violence and amazing generosity that would have been unimaginable to them before the tragedy. The very structure of society itself alters to suit the circumstances as once-civilized, urban dwellers become ragged nomads traveling by touch from building to building in search of food. The devil is in the details, and Saramago has imagined for us in all its devastation a hell where those who went blind in the streets can never find their homes again, where people are reduced to eating chickens raw and packs of dogs roam the excrement-covered sidewalks scavenging from corpses.

And yet in the midst of all this horror Saramago has written passages of unsurpassed beauty. Upon being told she is beautiful by three of her charges, women who have never seen her, "the doctor's wife is reduced to tears because of a personal pronoun, an adverb, a verb, an adjective, mere grammatical categories, mere labels, just like the two women, the others, indefinite pronouns, they too are crying, they embrace the woman of the whole sentence, three graces beneath the falling rain." In this one woman Saramago has created an enduring, fully developed character who serves both as the eyes and ears of the reader and as the conscience of the race. And in Blindness he has written a profound, ultimately transcendent meditation on what it means to be human. --Alix Wilber

JOSÉ SARAMAGO was born in 1922. His novels have been published in dozens of languages around the world. In 1998 he was awarded the Nobel Prize for Literature.