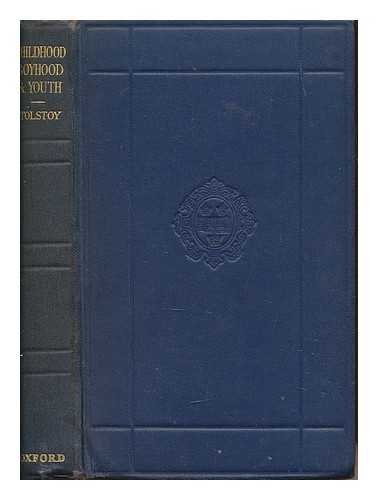 Begun in 1851, when Tolstoy was twenty-three and serving as a cadet in the Russian army, "Childhood, the first part of Tolstoy's first novel, won immediate praise from Turgenev and others, and marked Tolstoy's emergence as a major writer. Its originality was striking, as Tolstoy sought to communicate with great immediacy the "poetry" of childhood--the intense emotions, confusions, and fears attendant upon a young boy, Nikolenka, as he grows up. In the years following, "Boyhood and "Youth appeared (a fourth volume was planned but never executed), each replete with psychological and philosophical subtleties hitherto unknown in Russian literature. In Scammell's resplendent translation, "Childhood, Boyhood, and Youth remains one of Tolstoy's major works.

“No one has ever excelled Tolstoy in expressing the specific flavour, the exact quality of a feeling.” —Isaiah Berlin

Book Description Oxford University Press, 1930. Condition: Good. Reprint. Shows some signs of wear, and may have some markings on the inside. Seller Inventory # GRP108493372