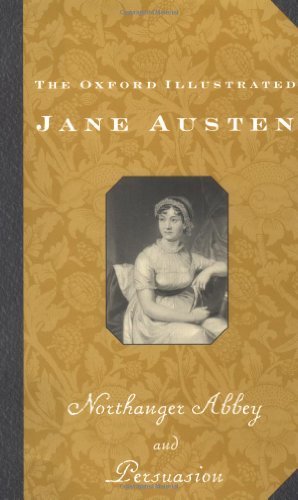 This is part of a complete set of Jane Austen's novels collating the editions published during the author's lifetime and previously unpublished manuscripts. The books are illustrated with 19th century plates and incorporate revisions by experts in the light of subsequent research.

Northanger Abbey has long been a popular member of the Jane Austen canon of novels, with its combination of literary burlesque, satirizing the prevailing taste for Gothic action, and the story of Catherine Morland's adventures as she captures the heart of Henry Tilney. Persuasion, the last completed novel Jane Austen wrote, was finished in 1816, the year before her death, and published posthumously in 1817. It features a heroine, Anne Elliot, older and wiser than her predecessors in earlier books, and its tone is more intimate and sober as Jane Austen unfolds a simple love-story with depth and subtlety.

One of England s most beloved authors, Jane Austen wrote such classic novels as Pride and Prejudice, Sense and Sensibility, Emma, and Northanger Abbey. Published anonymously during her life, Austen s work was renowned for its realism, humour, and commentary on English social rites and society at the time. Austen s writing was supported by her family, particularly by her brother, Henry, and sister, Cassandra, who is believed to have destroyed, at Austen s request, her personal correspondence after Austen s death in 1817. Austen s authorship was revealed by her nephew in A Memoir of Jane Austen, published in 1869, and the literary value of her work has since been recognized by scholars around the world.