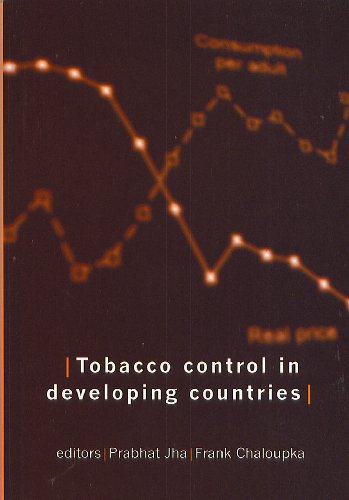 There is no doubt that smoking is damaging global health on an unprecedented scale. However, there is continuing debate on the economics of tobacco control, including the costs and consequences of tobacco control policies. This book aims to fill the analytic gap around this debate This book
brings together a set of critical reviews of the current status of knowledge on tobacco control. While the focus is on the needs of low-income and middle- income countries, the analyses are relevant globally. The book examines tobacco use and its consequences including new analyses of welfare
issues in tobacco consumption, poverty and tobacco, and the rationale for government involvement. It provides an evidence-based review of policies to reduce demand including taxation, information, and regulation. It critically reviews supply-side issues such as trade and industry and farming
issues, including new analyses on smuggling. It also discusses the impact of tobacco control programs on economies, including issues such as employment, tax revenue and welfare losses. It provides new evidence on the effectiveness and cost-effectiveness of control interventions. Finally, it
outlines broad areas for national and international action, including future research directions. A statistical annex will contain information on where the reader can find data on tobacco consumption, prices, trade, employment and other items. The book is directed at academic economists and
epidemiologists as well as technical staff within governments and international agencies. Students of economics, epidemiology and public policy will find this an excellent comprehensive introduction to economics of tobacco control.

Jha and Chaloupka, the editors of Tobacco Control in Developing Countries, dedicate the book to the approximately 100 million people who died of tobacco-related diseases in the 20th century. This dedication serves as an apt introduction to this concise and scholarly review of research on various aspects of tobacco use and control. The book provides an economic framework that adds a much-needed perspective to the wealth of epidemiologic data on the health consequences of tobacco use. Citing a plethora of studies, the authors examine whether interventions in tobacco control that are based on economic models have a meaningful role in curbing the tobacco epidemic in developing countries. They address these complex issues elegantly and admirably and conclude that price controls, improvements in health information programs for specific subgroups of the population, and regulation of the advertisement and promotion of tobacco products can all have desirable effects over time. Quite a few myths are dispelled along the way, and global tobacco manufacturers will not find evidence in this book to support their claims that tobacco-related policies cause massive unemployment and catastrophic losses of tax revenues within local economies.

The editors have organized the subject matter in a logical sequence, making it readily accessible to readers, and relationships are measured in a way that policymakers will surely find useful. Although the emphasis throughout the book is on developing countries, comparisons to smoking patterns and policies in "higher-income" countries are made with regard to virtually every topic. Given the large populations at risk in many of the developing countries and the fact that 8 out of 10 smokers live in these regions, these comparisons certainly give one pause and provide a sense of perspective on the global tobacco epidemic and its projected health consequences.

Many of the topics are introduced with a "devil's advocate" inquiry that brings a certain poignancy and realism to the issues in question, especially as they apply to countries that have limited resources and are less accustomed to government intervention in the choices of consumers. Why should a government interfere with the purchase of cigarettes by an informed consumer? There are sufficient epidemiologic data that demonstrate that the overwhelming majority of adults who smoke began smoking during late childhood and early adolescence. Although it is generally acknowledged that adults should be allowed to make their own informed choices, all societies recognize that there are certain decisions that should not be left up to children -- particularly decisions that are relevant to their long-term health. (Chapter 7 points out that the most effective policy for reducing smoking by young people is increasing the tax on tobacco products.) The economic assumptions behind a free-market economy, which Adam Smith vigorously advanced in his 18th-century book The Wealth of Nations as the "invisible hand" that guides individuals to follow their own self-interest, clearly do not apply to this issue.

A theme that resonates throughout the book is the importance to developing countries of the curtailment of addiction to tobacco -- a prerequisite for tobacco control, as higher-income countries have already discovered. To increase the likelihood that programs will reduce the demand for tobacco products, these programs must be allowed to exert their natural effect over time. As we have seen in the United States, intervention in the epidemic of smoking is a difficult and complex task for any government, but such programs have real economic and public health benefits, as well as incalculable benefits for the quality of individual human lives.