Items related to The Breadwinner 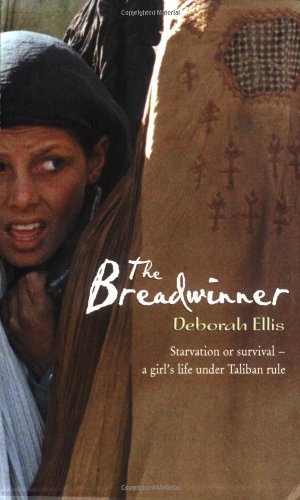 AFGHANISTAN: Parvana's father is arrested and taken away by the Taliban soldiers. Under Taliban law, women and girls are not allowed to leave the house on their own. Parvana, her mother, and sisters must stay inside.

Four days later, the food runs out. They face starvation.

So Parvana must pretend to be a boy to save her family. It is a dangerous plan, but their only chance. In fear she goes out - and witnesses the horror of landmines, and the bruality of the Taliban. She suffers beatings and the desperation of trying to survive. But even in despair lies hope

Since the Taliban took over Afghanistan, 11-year-old Parvana has rarely been outdoors. Barred from attending school, shopping at the market, or even playing in the streets of Kabul, the heroine of Deborah Ellis's engrossing children's novel The Breadwinner is trapped inside her family's one-room home. That is, until the Taliban hauls away her father and Parvana realizes that it's up to her to become the "breadwinner" and disguise herself as a boy to support her mother, two sisters, and baby brother. Set in the early years of the Taliban regime, this topical novel for middle readers explores the harsh realities of life for girls and women in modern-day Afghanistan. A political activist whose first book for children, Looking for X, dealt with poverty in Toronto, Ellis based The Breadwinner on the true-life stories of women in Afghan refugee camps.

In the wily Parvana, Ellis creates a character to whom North American children will have no difficulty relating. The daughter of university-educated parents, Parvana is thoroughly westernized in her outlook and responses. A pint-sized version of Offred from Margaret Atwood's The Handmaid's Tale, Parvana conceals her critique of the repressive Muslim state behind the veil of her chador. Although the dialogue is occasionally stilted and the ending disappointingly sketchy, The Breadwinner is essential reading for any child curious about ordinary Afghans. Like so many books and movies on the subject, it is also eerily prophetic. "Maybe someone should drop a big bomb on the country and start again," says a friend of Parvana's. "'They've tried that,' Parvana said, 'It only made things worse.'" (Ages 9 to 12) --Lisa Alward

Imagine living in a country in which women and girls are not allowed to leave the house without a man. Imagine having to wear clothes that cover every part of your body, including your face, whenever you go out.

In this powerful and realistic tale, eleven-year-old Parvana lives with her family in one room of a bombed-out apartment building in Kabul, Afghanistan's capital city during the Taliban rule. Parvana's father- a history teacher until his school was bombed and his health destroyed- works from a blanket on the ground in the marketplace, reading letters for people who cannot read or write. One day he is arrested for the crime of having a foreign education, and the family is left without someone who can earn money or even shop for food. As conditions in the family grow desperate, only one solution emerges. Forbidden by the Taliban government to earn money as a girl, Parvana must transform herself into a boy and become the breadwinner.