Items related to The Renaissance Bazaar: From the Silk Road to Michelangelo

Brotton, Jerry The Renaissance Bazaar: From the Silk Road to Michelangelo

The Renaissance Bazaar: From the Silk Road to Michelangelo 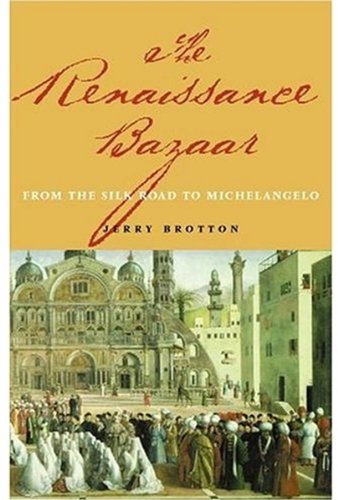 The Renaissance rang in changes at a breathtaking pace, changes that shape the world to this day. Now Jerry Brotton deftly captures this remarkable age, in a book that places Europe's great flowering in a revealing global context.
It was Europe's contact with the outside world, Brotton argues, especially with the rich and cultivated East, that made the Renaissance what it was. Indeed, Europeans saw themselves through the mirror of the East--it was during this age, for instance, that they first spoke of themselves as "Europeans." Here is cultural history of the best kind, as Brotton muses on the meanings of Holbein's painting "The Ambassadors"--which is virtually a catalog of the international influences on Europe--or on the Arabic influence in the burgeoning sciences of astronomy and geography. This global approach offers revealing new insights into such men as Dante and Leonardo da Vinci and highlights the international influences behind Chaucer's Canterbury Tales. Along with fresh and original discussions of well-known figures from Copernicus to Dürer to Shakespeare, Brotton offers a far-reaching exploration that looks at paintings and technology, patterns of trade and the printed page, as he illuminates the overarching themes that defined the age.
From architecture to medicine, from humorists to explorers, the teeming world of the Renaissance comes to life in this thoughtful, insightful, and beautifully written book, which offers us a timely perspective on the Renaissance as a moment of global inclusiveness that still has much to teach us today.

Jerry Brotton is a Lecturer in English at the University of London. He is the author of Trading Territories: Mapping the Early Modern World and Global Interests: Renaissance Art between East and West (with Lisa Jardine).

Despite what most of us learned in high school, this scholarly yet accessible book argues that the storied achievements of the Renaissance did not rest solely on the chiseled shoulders of a few Italian men. Instead, posits Brotton, a lecturer at the University of London, the cultivated East had a profound impact on the West during the famously fertile period of 1400-1600. With broad brushstrokes, Brotton applies his thesis to major Renaissance innovations, revealing the Islamic world's contributions to fields as varied as cartography, astronomy, architecture and commerce. Not only did Iberian forays into Southeast Asia and Africa boost Western appetites for "conspicuous consumption" in the forms of spices and frippery, they also heightened Europe's awareness of her own status relative to her wealthy distant neighbors, the Ottoman Empire. Brotton goes north as well, singling out German and Flemish paintings as iconic representations of this East-West exchange. But in his plea for inclusion, he jeopardizes his own coverage: this lean volume suffers from an excess of overview and an absence of focus, which may disappoint, as might his cursory consideration of the regrettable consequences of this meeting of worlds-colonization, and the rise of the slave trade. 25 halftones & 8 color plates
Copyright 2002 Reed Business Information, Inc.

1. The Renaissance Bazaar: From the Silk Road to Michelangelo

2. The Renaissance Bazaar: From the Silk Road to Michelangelo

3. The Renaissance Bazaar: From the Silk Road to Michelangelo Brotton, Jerry