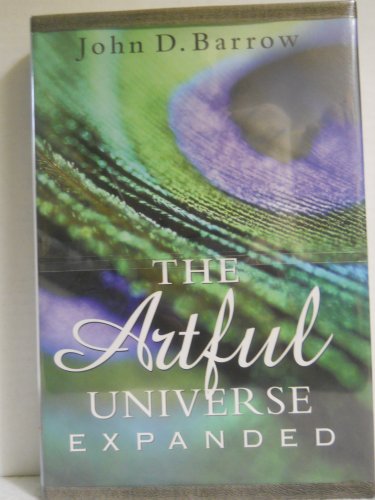 Our love of art, writes John Barrow, is the end product of millions of years of evolution. How we react to a beautiful painting or symphony draws upon instincts laid down long before humans existed. Now, in this enhanced edition of the highly popular The Artful Universe, Barrow further explores the close ties between our aesthetic appreciation and the basic nature of the Universe.
Barrow argues that the laws of the Universe have imprinted themselves upon our thoughts and actions in subtle and unexpected ways. Why do we like certain types of art or music? What games and puzzles do we find challenging? Why do so many myths and legends have common elements? In this eclectic and entertaining survey, Barrow answers these questions and more as he explains how the landscape of the Universe has influenced the development of philosophy and mythology, and how millions of years of evolutionary history have fashioned our attraction to certain patterns of sound and color. Barrow casts the story of human creativity and thought in a fascinating light, considering such diverse topics as our instinct for language, the origins and uses of color in nature, why we divide time into intervals as we do, the sources of our appreciation of landscape painting, and whether computer-generated fractal art is really art.
Drawing on a wide variety of examples, from the theological questions raised by St. Augustine and C.S. Lewis to the relationship between the pure math of Pythagoras and the music of the Beatles, The Artful Universe Expanded covers new ground and enters a wide-ranging debate about the meaning and significance of the links between art and science.

John Barrow is Professor of Mathematical Sciences at the University of Cambridge. Hailed as "the Stephen Jay Gould of the mathematical sciences" (Sir Martin Rees), he is the author of 15 popular science books, including Pi in the Sky, Theories of Everything, The Origin of the Universe, and The Anthropic Cosmological Principle (with Frank Tipler).

Review from previous edition: "an engaging book ... practically a universal education in both the history of modern science and the history of the Universe ... will be much quoted, much debated and much praised" --Nature

"a feast: the kind of book which tells you everything you want to know about everything" --The Economist

"I was infuriated by it, disagreed with it and loved reading it." --Timothy Ferris, New York Times Book Review

"in the speculative and intellectual richness of its pages, this book is probably unsurpassed" --Peter Atkins

"unique and wide-ranging book ... The reader is taken on an eclectic study of many scientific disciplines and is presented with a revealing picture of the structure of the physical world solely in terms of its invariant constants. There are also fascinating chapters on the definition and nature of life, the search for extra-terrestrial intelligence and the interpretation of quantum theory in relation to the existence of observers." --Europe and Astronomy 1992 25/02/1993

"..it is consistently diverting and illuminating and indeed, at its best, hard to put down in its communication of the excitement of seeing the world as an exercise in the mathematics of energy. --Hugh Lawson-Tancred, The Spectator, on Between Inner Space and Outer Space

"Barrow is emerging as the Stephen Jay Gould of the mathematical sciences. These fluent and erudite essays should further enhance his reputation." --Professor Sir Martin Rees, Astronomer Royal, on Between Inner Space and Outer Space