Items related to The Good Soldier: A Tale of Passion

Ford Madox Ford The Good Soldier: A Tale of Passion

The Good Soldier: A Tale of Passion 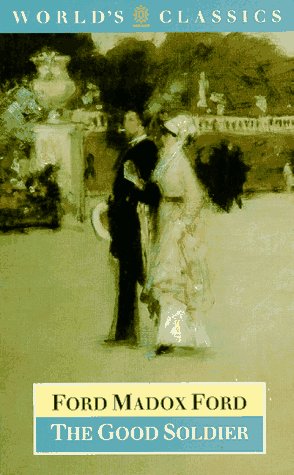 "A Tale of Passion," as its subtitle declares, The Good Soldier relates the complex social and sexual relationships between two couples, one English, one American, and the growing awareness by the American narrator John Dowell of the intrigues and passions behind their orderly Edwardian facade. It is the attitude of Dowell, his puzzlement, uncertainty, and the seemingly haphazard manner of his narration that make the book so powerful and mysterious. Despite its catalogue of death, insanity, and despair, the novel has many comic moments, and has inspired the work of several distinguished writers, including Graham Greene. This is the only annotated edition available.

First published in 1915, Ford Madox Ford's The Good Soldier begins, famously and ominously, "This is the saddest story I have ever heard." The book then proceeds to confute this pronouncement at every turn, exposing a world less sad than pathetic, and more shot through with hypocrisy and deceit than its incredulous narrator, John Dowell, cares to imagine. Somewhat forgotten as a classic, The Good Soldier has been called everything from the consummate novelist's novel to one of the greatest English works of the century. And although its narrative hook--the philandering of an otherwise noble man--no longer shocks, its unerring cadences and doleful inevitabilities proclaim an enduring appeal.

Ford's novel revolves around two couples: Edward Ashburnham--the title's soldier--and his capable if off-putting wife, Leonora; and long-transplanted Americans John and Florence Dowell. The foursome's ostensible amiability, on display as they pass parts of a dozen pre-World War I summers together in Germany, conceals the fissures in each marriage. John is miserably mismatched with the garrulous, cuckolding Florence; and Edward, dashing and sentimental, can't refrain from falling in love with women whose charms exceed Leonora's. Predictably, Edward and Florence conduct their affair, an indiscretion only John seems not to notice. After the deaths of the two lovers, and after Leonora explains much of the truth to John, he recounts the events of their four lives with an extended inflection of outrage. From his retrospective perch, his recollections simmer with a bitter skepticism even as he expresses amazement at how much he overlooked.

Dowell's resigned narration is flawlessly conversational--haphazard, sprawling, lusting for sympathy. He exudes self-preservation even as he alternately condemns and lionizes Edward: "If I had had the courage and the virility and possibly also the physique of Edward Ashburnham I should, I fancy, have done much what he did." Stunningly, Edward's adultery comes to seem not merely excusable, but almost sublime. "Perhaps he could not bear to see a woman and not give her the comfort of his physical attractions," John surmises. Ford's novel deserves its reputation if for no other reason than the elegance with which it divulges hidden lives. --Ben Guterson

Ford Madox Ford wrote The Good Soldier, the book on which his reputation most surely rests, in deliberate emulation of the nineteenth-century French novels he so admired. In this way he was able to explore the theme of sexual betrayal and its poisonous after-effects with a psychological intimacy as yet unknown in the English novel.

1. The Good Soldier: A Tale of Passion