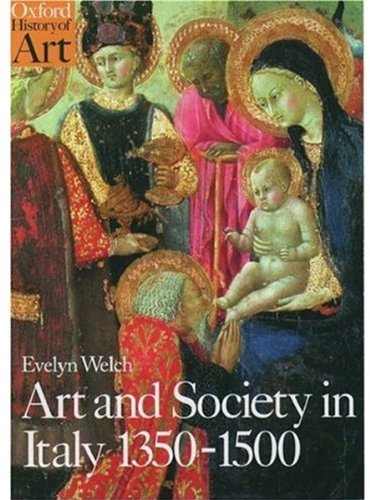 The Italian Renaissance was a pivotal period in the history of Western culture during which artists such as Masaccio, Donatello, Fra Angelico, and Leonardo created some of the world's most influential and exciting works in a variety of artistic fields. Here, Evelyn Welch presents a fresh picture of the Italian Renaissance by challenging traditional scholarship and placing emphasis on recreating the experience of contemporary Italians: the patrons who commissioned the works, the members of the public who viewed them, and the artists who produced them. Art and Society in Italy 1350-1500 dramatically revises the traditional story of the Renaissance and takes into account new issues that have greatly enriched our understanding of the period. From paintings and coins to sculptures and tapestries, Welch examines the issues of materials, workshop practices, and artist-patron relationships, and explores the ways in which visual imagery related to contemporary sexual, social, and political behavior.

Evelyn Welch is a Senior Lecturer at the University of Sussex. Her publications include Art and Authority in Renaissance Milan (Yale, 1995).

Turner's (arts and humanities, New York Univ.) introduction to early Renaissance Florence neatly articulates the economic, political, and religious milieu of the city's artistic efflorescence. Within that context, he artfully limns an image of the expanding urban fabric of the 14th and 15th centuries. Besides evoking the problems of artistic function, patronage, and the training and professional life of the artist, the author articulates the intricate stylistic byways that mark the onset of the new Renaissance approach in sculpture, architecture, and painting, including a survey of the interior decoration of monasteries and homes and a contextual overview of some of the key monuments of the later 15th century. While unsurprising in its approach and conclusions, this carefully etched work is more than adequate as a primer to the study of the early Renaissance in Florence. Welch (Art and Authority in Renaissance Milan, Yale Univ., 1995) casts his investigative net over all Italy. Giving particular emphasis to the social ambiance in which art is produced and consumed, his discussion is marked by its scholarly breadth, clarity of argument, and willingness to include objects not within the canonic corpus. Readers should derive a deeper appreciation of the way contemporaries may have experienced works of art and the historical, religious, and intellectual environment from which they emerged. Along with keen analyses of the materials and the making of objects, workshop practices, and the relationship of artists and patrons, the context and function of sacred, public, and domestic works are vividly delineated here. While largely eschewing the formal analysis of traditional art history, Welch's deeply informed and wide-ranging synthesis is a significant and welcome addition to the literature.?Robert Cahn, Fashion Inst. of Technology, New York
Copyright 1997 Reed Business Information, Inc.