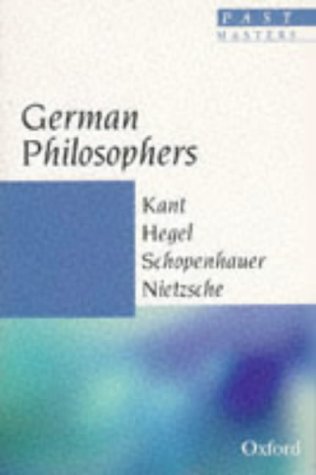 German Philosophers contains studies of four of the most important German theorists: Kant, arguably the most influential modern philosopher; Hegel, whose philosophy inspired a vision of a communist society that for more than one hundred years enlivened revolutionary movements around the world; Schopenhauer, renowned for his pessimistic view that for human individual non-existence would be preferable; and Nietzsche, who has been appropriated as an icon by an astonishingly diverse spectrum of people.
Written by leading scholars in the field, German Philosophers is the only work to bring together texts on the four philosophers who represent a central school of German philosophy. With a Foreword by Sir Keith Thomas and extensive notes for further reading, this handy volume serves as an easy-to-use introduction for the beginning philosophy student and a quick and comprehensive reference for scholars.

About the Authors:
Roger Scruton is Professor of Philosophy at Birkbeck College, London. His books include Spinoza, also in the Past Masters series, Sexual Desire, and Modern Philosophy, along with several works of fiction. Peter Singer is Professor of Philosophy and Deputy Director of the Center for Human Bioethics at Monash University, Melbourne. He is well known for his text Animal Liberation. His other books include Democracy and Disobedience, Practical Ethics, and the Past Master on Marx. His recent book, Rethinking Life and Death, won the National Book Council of Australia's Bajo Award for the best non-fiction book of 1994. Christopher Janaway is Senior Lecturer in Philosophy at Birkbeck College, London, and author of Self and World in Schopenhauer's Philosophy (1989). Michael Tanner is a Fellow of Corpus Christi Colege and a University Lecturer in Philosophy at Cambridge. His publications include Critical History of Opera and Wagner.

`Review from previous edition Roger Scruton on Kant:
'Roger Scruton faced perhaps the most intractable task of all in giving an elementary account of Kant's philosophy ... but he does it extremely elegantly and neatly.''
Listener