Items related to Advent for Choirs: Spiral bound edition (. . . for... 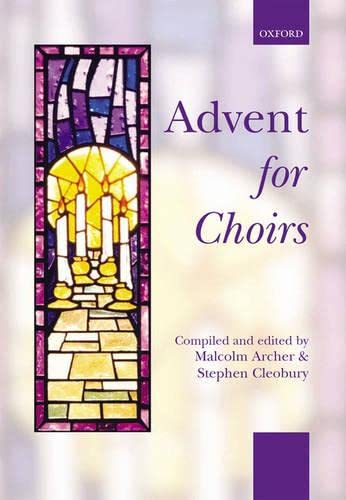 This unique collection approaches Advent afresh, drawing together 52 beautiful and accessible pieces that span the whole gamut of periods, styles, and traditions. Advent for Choirs is the perfect musical and liturgical resource for all church , cathedral, and concert choirs and includes approachable new settings, unjustly neglected music, and works not easily available elsewhere.

Malcolm Archer was educated at King Edward VII School, Lytham, the Royal College of Music, and Jesus College, Cambridge, where he was organ scholar. He studied the organ with Ralph Downes, Gillian Weir and Nicolas Kynaston, and composition with Herbert Sumsion and Alan Ridout. He is a prolific composer with well over 200 published works, which receive regular performances on BBC radio and TV. Archer was formerly Organist and Director of Music at St Paul's Cathedral and is now Director of Chapel Music at Winchester College. Stephen Cleobury is an English organist and conductor. He was organ scholar at St John's College, Cambridge and sub-organist of Westminster Abbey before becoming Master of Music at Westminster Cathedral in 1979. In 1982 he took up the position of Director of Music for the Choir of King's College, Cambridge, where he also teaches music. He has been conductor of Cambridge University Musical Society since 1983, and was Chief Conductor of the BBC Singers from 1995 to 2007, and Conductor Laureate from 2007.

This book will provide an extremely valuable resource . . . competent church choirs will probably benefit most from it, particularly if their directors of music have either limited knowledge of available repertoire or limited time for choosing and sourcing music . . . Perhaps those dog-eared copies could be chucked in the bin and replaced with a set of brand new copies of this anthology! * Choir and Organ, Sept/Oct 2000 * Continuing along the trail they blazed successfully nearly 40 years ago with the publication of the first of the Carols for Choirs series, Oxford University Press have now produced what seems likely to be another winner, Advent for Choirs . . . The distinguished editors, Malcolm Archer and Stephen Cleobury, have produced a marvellous resource book for church, cathedral and concert choirs of all sizes and abilities. It represents outstanding value for money. * Music Teacher, May 2001 *

Shipping: US$ 18.28
From United Kingdom to U.S.A.
Destination, rates & speeds

Shipping: US$ 30.47
From United Kingdom to U.S.A.
Destination, rates & speeds