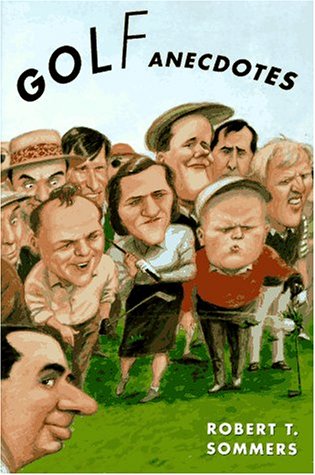 Francis Ouimet's playoff win over Vardon and Ray in the 1913 U.S. Open, an upset victory so extraordinary it ignited a golf craze in America. Bobby Jones completing his Grand Slam, defeating Gene Homans at Merion in the 1930 U.S. Amateur. Arnold Palmer's charge from behind at Cherry Hills to take the Open in 1960. These are but a few of golf's many great moments. Now, in Golf Anecdotes, readers can enjoy a sweeping look at this royal and ancient game, in a volume that is both an informal history of the sport as well as a vivid recounting of golf's most notable incidents.
Robert Sommers, former editor and publisher of Golf Journal (the USGA's official publication), takes us on a grand tour that stretches from the game's dim origins in the 12th century right up to the modern PGA tour. Indeed, no other anecdote book offers this much historical depth or serves up such fascinating lore. We learn for instance that the first known golf match took place in 1504, between James IV of Scotland and the Earl of Bothwell, and that James Durham's then remarkable 94 at St Andrews in 1767 was a record that stood for 86 years. Sommers likewise paints a colorful portrait of golf in the era of the first professionals--Old Tom Morris, Allan Robertson, and Willie Park--describing the earliest rules, the equipment used, the most memorable events. Of course, much of the book focuses on the 20th century. Here readers will find wonderful tales of Harry Vardon and Francis Ouimet, Bobby Jones and Walter Hagen, Sam Snead and Ben Hogan, Joyce Wethered and Babe Zaharias, Arnold Palmer and Jack Nicklaus, Tom Watson and Lee Trevino, and current stars Nick Faldo, Seve Ballesteros, and Greg Norman. We follow Bobby Jones as he captures each leg of his Grand Slam (and learn that in the eight years that Jones dominated world golf, he kept his game in shape mainly playing friendly weekend matches with his father and friends); watch as Gene Sarazen scores his famous double eagle in the 1935 Masters; travel from tournament to tournament as Bryon Nelson notches up a remarkable streak of eleven consecutive victories (including the 1945 PGA and the Canadian Open); witness Ben Hogan's harrowing car accident and miraculous comeback; and walk along with Ken Venturi during his courageous 36 hole performance at Congressional, winning the U.S. Open while on the verge of collapse. There are also some notable miscues as well, such as Hale Irwin's whiff of a two-inch putt in the British Open (he finished second by one shot) and T.C. Chen's catastrophic double-hit while leading the U.S. Open (he also lost by a shot). Sommers also describes some of the most noteworthy course architects, such as George Crump, creator of the great Pine Valley (Crump lived in a tent on the course for two years, supervising construction, then tragically died before the course opened). He recounts many stories we might not have known, such as how a nineteen-year-old black golfer John Shippen nearly won the second U.S. Open at Shinnecock Hills, Long Island, in 1896. And he captures some of golf's most moving moments, such as when Babe Zaharias, dying of cancer, visited a golf course for the last time.
Here then is the wide world of golf, the Arnold Palmers and the Ky Laffoons, the double eagles and the double hits. Informative and highly entertaining, Golf Anecdotes will appeal to anyone who loves the game.

About the Author:
A golf writer for more than forty years, Robert Sommers is former editor and publisher of Golf Journal and the author of The U.S. Open, Golf's Ultimate Challenge, and Great Shots (written with Cal Brown).

A cornucopia of tales about the game and its players, this compendium by the former editor of Golf Journal and author of The U.S. Open will entertain fairway fans. Sommers's historical approach moves from the presumed 12th-century origin of the game through the development of ever more sophisticated equipment and democracy on the course to the hegemony of the U.S. and eventual international parity among players. Some of the anecdotes are touching, such as those involving Bobby Jones's 23-year fight against terminal illness and the dying Babe Zaharias's last visit to the links, but many more are humorous: Ring Lardner's wisecracks while playing a round with then President Warren Harding, or the female champion who blew up when she read the inscription on a dog-show trophy mistakenly presented to her?Best Bitch in Show. Capping them all, however, is the reply of Ben Hogan when asked how to improve one's game: "Hit the ball closer to the hole."
Copyright 1995 Reed Business Information, Inc.