Items related to Analysis of Transport Phenomena (Topics in Chemical... 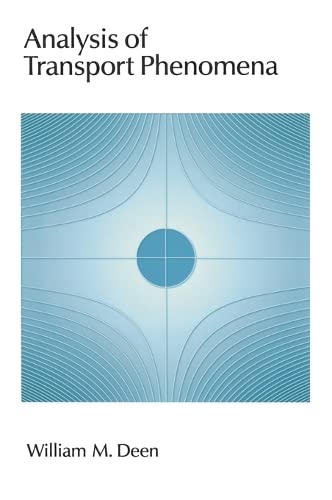 An ideal text for graduate level courses in transport phenomena for chemical engineers, Analysis of Transport Phenomena provides a unified treatment of momentum, heat, and mass transfer, emphasizing the concepts and analytical techniques that apply to all of these transport processes.
The first few chapters establish the tools needed for later analyses while also covering heat and mass transfer in stationary media. The similarities among the molecular or diffusive transport mechanisms--heat conduction, diffusion of chemical species, and viscous transfer of momentum--are highlighted. Conservation equations for scalar quantites are derived first in general form, and then used to obtain the governing equations for total mass, energy, and chemical species. The scaling and order-of-magnitude concepts which are crucial in modeling are also introduced. Certain key methods for solving the differential equations in transport problems, including similarity, perturbation, and finite Fourier transform techniques, are described using conduction and diffusion problems as examples.
Following chapters are devoted to fluid mechanics, beginning with fundamental equations for momentum transfer and then discussing unidirectional flow, nearly unidirectional (lubrication) flow, creeping flow, and laminar boundary layer flow. Forced-convection heat and mass transfer in laminar flow, multicomponent energy and mass transfer, free convection, and turbulence are also covered. The appendix summarizes vector and tensor operations and relations involving various coordinate systems.
Based on twenty years of teaching and extensive class testing, Analysis of Transport Phenomena offers students both extensive coverage of the topic and inclusion of modern examples from bioengineering, membrane science, and materials processing. It is mathematically self-contained and is also unique in its treatment of scaling and approximation techniques and its presentation of the finite Fourier transform method for solving partial differential equations.

William M. Deen is at Massachusetts Institute of Technology.

"Covers several pertinent areas of transport phenomena with a concentrated focus of single and mixed transport systems. This material would be excellent for a rigorous graduate transport course or for recommended reading in an elective special topics class."--Kenneth L. Roberts, North Carolina
AandT State University

"An excellent text and long-needed replacement for the classic text by Bird, Stewart, and Lighfoot. The use of finite Fourier transform is a very good addition to the topic."--Ralph W. Pike, Louisiana State University