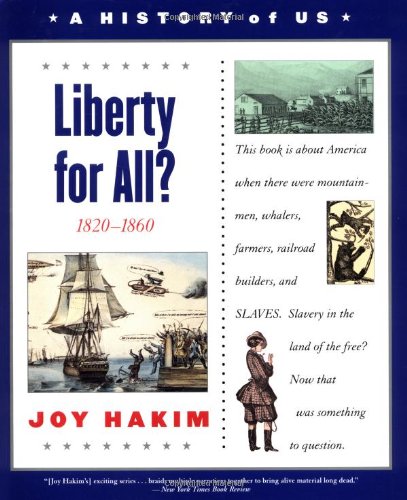 Early nineteenth-century America could just about be summed up by Henry David Thoreau's words when he said, "Eastward I go only by force, but westward I go free." It was an exuberant time for the diverse citizens of the United States, who included a range of folk, from mountain men and railroad builders to whalers and farmers, as they pushed forward into the open frontier and all their hopes and fears are captured in Liberty for All? In addition to colorful accounts of the massive westward migration, the California Gold Rush, a war with Mexico, the Oregon boundary conflict, Texas and the Alamo, Liberty for All? takes a deep look at the issue that began to gnaw at the country's core: How, in the land where "all men are created equal," could there be slaves?

Are you looking for adventure? Head west with mountain men, Mormons, pioneers, and gold prospectors. Or try a Nantucket sleigh ride. If youve just arrived from China or Ireland you can get a job building the across-the-nation railroad. If youre a slave you might ride the Underground Railroad to freedom. Slaves? How did we get slavery in the land of the free?

Joy Hakim is a former newspaper writer and editor and elementary school teacher who holds a bachelor's degree in government from Smith College and a master's degree in education from Goucher College.