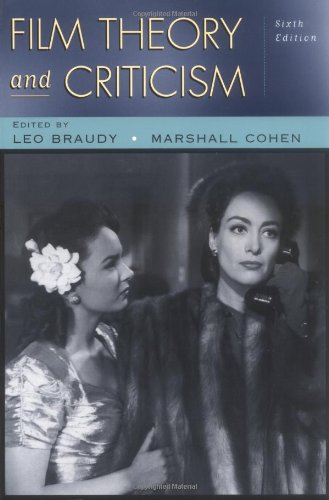 Since publication of the first edition in 1974, Film Theory and Criticism has been the most widely used and cited anthology of critical writings about film. Extensively revised and updated, this sixth edition highlights both classic texts and cutting edge essays from more than a century of thought and writing about the movies. Editors Leo Braudy and Marshall Cohen have reformulated the book's sections and their introductions in order to lead students into a rich understanding of what the movies have accomplished, both as individual works and as contributions to what has been called "the art form of the twentieth [and now twenty-first] century." Building upon the wide range of selections and the extensive historical coverage that marked previous editions, this new compilation stretches from the earliest attempts to define the cinema to the most recent efforts to place film in the contexts of psychology, sociology, and philosophy, and to explore issues of gender and race.
The sixth edition features several new essays that discuss the impact of digital technology on the traditional conceptions of what films do and how they manage to do it. Additional selections from the important works of Gilles Deleuze round out sections dealing with the theories of such writers as Sergei Eisenstein, André Bazin, and Christian Metz, among others. New essays also strengthen sections dealing with the idea of "excess" in film, film spectatorship, the horror genre, and feminist criticism. Film Theory and Criticism, 6/e, is ideal for undergraduate and graduate courses in film theory and criticism.

Leo Braudy and Marshall Cohen are both at the University of Southern California.

"An excellent introductory survey text, offering key essays in film theory and criticism for the beginning student. . . . A superb text in every respect; well annotated and authoritative."--Wheeler Winston Dixon, University of Nebraska