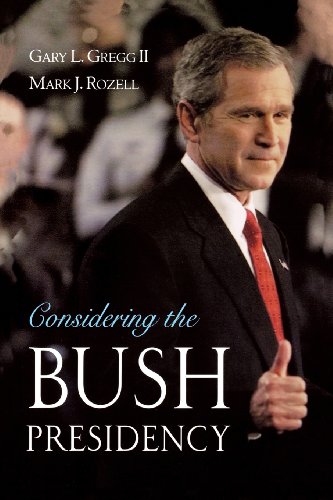 George W. Bush became president under some of the most unusual circumstances in U.S. history, with the very legitimacy of his claim to victory a matter of strong public debate. In spite of the highly contested election that brought him to power, Bush came into office with assertiveness and resolve, surprising many of his critics with a successful early push for tax reduction and other domestic initiatives. However, the shattering events of September 11, 2001 forced the Bush administration to refocus its agenda. Since that day, the power of the presidency--as well as its limitations--have been at the forefront of the public's mind.
Considering the Bush Presidency offers a wide-ranging scholarly review and analysis of the George W. Bush presidency. Written by leading political scientists, this collection features timely and unique essays that cover such topics as the Bush transition, staffing the Bush presidency, battles over executive privilege, Bush and presidential war powers, the vice presidency of Dick Cheney, and the relationship between the president and Congress. With selections that balance popular topics and theoretical rigor, Considering the Bush Presidency is ideal for introductory American politics and presidency courses.