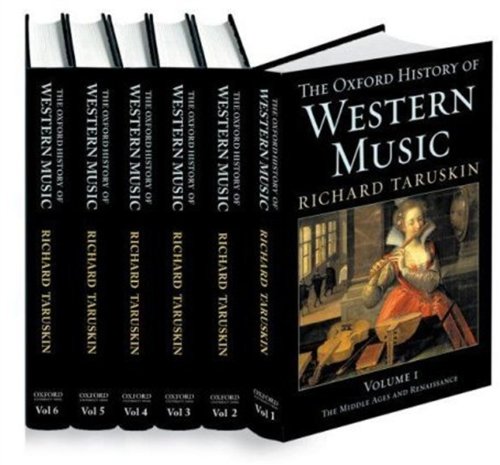 The Oxford History of Western Music is a magisterial survey of the traditions of Western music by one of the most prominent and provocative musicologists of our time. This text illuminates, through a representative sampling of masterworks, those themes, styles, and currents that give shape and direction to each musical age. Taking a critical perspective, this text sets the details of music, the chronological sweep of figures, works, and musical ideas, within the larger context of world affairs and cultural history. Written by an authoritative, opinionated, and controversial figure in musicology, The Oxford History of Western Music provides a critical aesthetic position with respect to individual works, a context in which each composition may be evaluated and remembered. Taruskin combines an emphasis on structure and form with a discussion of relevant theoretical concepts in each age, to illustrate how the music itself works, and how contemporaries heard and understood it. It also describes how the context of each stylistic period--key cultural, historical, social, economic, and scientific events--influenced and directed compositional choices.

The history of "history"--our changing perspectives on the act of narrating and trying to "recapture" the past--encompasses the most profound seismic shifts in modern consciousness. Once seemingly commonsensical, the science-aspiring ambition of historiography to recount the past "as it actually was" (to borrow Leopold von Ranke's famously misunderstood phase) now betrays anachronistic naivete, if not a dangerous arrogance masquerading as objectivity. And the business of cultural history provides a particularly fascinating--and contentious--index to the larger issues at stake. The very urgency of the debate over "how" to tell the story (and indeed what the story is) continues to intensify in proportion to the uncertainty of our times.

Considering its official title (bearing an impressive imprimatur from Oxford University Press, the vanguard of scholarly reference works), Richard Taruskin's grand opus might appear at first glance to eschew the more-heated arenas of debate involving cultural history. Quite the contrary: Taruskin throws down the gauntlet at once and passionately joins in the fray. In the process, he strips the story of music's development in the West (i.e., Europe and America) of its deceptively innocuous trappings and received ideas, thrusting it into the spotlight of contemporary critical inquiry. The result, virtually a priori, is a highly controversial reexamination of a narrative that will cause even the most open-minded music lover to do a number of double-takes. What's extraordinary about Taruskin's achievement is how immensely engrossing, insightful, provocative, fresh, and downright brilliant the "history of Western music" becomes in his weaving of it.

But why yet another sweeping history when the New Grove Dictionary of Music has been recently overhauled (in an edition to which Taruskin prolifically contributed), and when long-standing classic texts such as Paul Henry Lang's Music in Western Civilization continue to be reissued? The heart of the matter lies in the very ambition behind this new history. First, some of the fun factoids: at nearly 4,000 pages (along with an additional resource volume containing master index, chronologies, and bibliography), The Oxford History of Western Music weighs nearly 20 pounds and took a decade to write. In other words, this isn't history-by-committee. Its perspective from the point of view of one massively learned individual is at once the work's chief strength and its Achilles heel. Taruskin's powerful voice echoes the kind of "old-fashioned" synthesis, with its attempt at an "overarching trajectory," of such pioneering cultural historians as Jacob Burckhardt or perhaps even the epic sweep of Gibbon's The Decline and Fall of the Roman Empire—-an antidote to the curse of ivory-tower specialization. But, more crucially, Taruskin arms that voice with the toolkit of contemporary historiography to pursue a critical rethinking of how Western music turned out as it did, and where it is today. His singular viewpoint anchors Taruskin's attempt to show that "the literate tradition of Western music is coherent at least insofar as it has a completed shape."

It's important to realize, as Taruskin early acknowledges, that his work is meant not as a stock-taking "survey" but as a history. That is, it involves an unfolding both of that larger coherence and of many smaller narratives that are its tributaries: not of the artwork (or composer) alone, but those of its production, its social and political context, and its (often-changing) reception as integral components of musical "meaning." Taruskin's aim is to filter out the distorting perspectives of "historicism" (the myth of purposeful, goal-oriented evolution through history) and aestheticism (which considers the artwork as a "pure," timeless entity). Along the way, this means smashing rows upon rows of icons and legends (not surprisingly, the bulk of these stemming from the 19th-century Germanic tradition, but also comprising a good deal of 20th-century received ideas about Stravinsky, Soviet composers such as Shostakovich, and various postwar "elitisms").

Inevitably, Taruskin doesn't prove immune to resorting to some legends of his own. In an extraordinary overview of Wagner, for example, he persuasively debunks the routine citation of Tristan und Isolde as pointing toward the coming "collapse of tonality," demonstrating how such thinking is the epitome of "the historicist tendency to write history backward with an eye toward giving the present a justification." Yet he's also capable of reducing the Wagner of the Ring to an obsession with a "cult of strength" in what is an otherwise deeply insightful discussion of "the Wagner problem." In terms of the larger stakes of this history, Taruskin's strongly argued debating points (and debunkings) at times veer in more eccentric directions, especially when it comes to such pivotal figures as Stravinsky, who gets a particularly intense thrashing. And regardless of Taruskin's theoretical stances, the reader must be alert to alarming occasional lapses of "mere" fact (how, one wonders, could an editorial team of over 40 not notice the claim that Carmina burana is scored for eight soloists in their fact checks, or fail to ensure that the endnotes match actual citations in the text?) Other tics, such as the author's fondness for scare quotes, may leap out depending on one's particular allergies.

Despite its imperfections, Taruskin's work is undeniably a stunning and stimulating achievement. It's impossible to describe adequately the sheer artfulness of his method, whereby he can distill a multiple series of investigations into a few wonderfully insightful sentences. Ever the master contrapuntalist, Taruskin weaves his various levels of discourse into a meaningful whole. There is true virtuosity in his ability to toggle from social history to in-the-trenches musicological analysis, zeroing in with his uncanny intuition to the most rewardingly illustrative points. His method of the exemplifying metonym--using just a few examples to wring out maximum insight, like the linear perspective of Renaissance artists--becomes a tour de force in his examination of figures such as Du Fay, D. Scarlatti, J.S. Bach, Beethoven, Schoenberg, or Britten. Taruskin's scope moreover is as radically reorienting as the Big Bang theory when it comes to the relative proportions he accords the narrative of Western music. Beginning with the advent of "literate" musical culture in Carolingian times, he devotes a great deal of attention to what was long thrown together as the "pre-Bach" era. Even more radically, around 40% of the total text is devoted to music of the 20th century (two of the five volumes of the history proper). Within this span, amid all its mind-boggling diversity, a number of centripetal themes emerge: the interdependence of "absolute" and "program" music, the interplay of oral and folk with literate musical cultures, the power of myth, and the possibility for musical "meaning." Taruskin's journey is endlessly fascinating, and his work makes an enormous contribution to the field. For all the controversy it's destined to generate, it will become impossible to ignore. Perhaps its surest mark of success is the sense of urgent importance and connectedness with which this history invests the cultural matter of music. Wherever you dip in, Taruskin invites an open conversation that leaves plenty of new, revealing perceptions in its wake, but probably more questions that when you started. Indeed, there's a sense that Taruskin would consider his work to have failed if the reader were only to nod in assent to all he has to say. --Thomas May

Richard Taruskin is professor of musicology at the University of California, Berkeley. In addition to this work, Taruskin is also the author of such books as Music in the Western World: A History in Documents (1985), Text & Act (OUP, 1995), and Stravinsky and the Russian Traditions (1996). He is a frequent contributor to the New York Times, New Republic, and many other scholarly journals.

Book Description Oxford University Press, Incorporated, 2006. Condition: Good. Former Library book. Shows some signs of wear, and may have some markings on the inside. Seller Inventory # 10983458-6