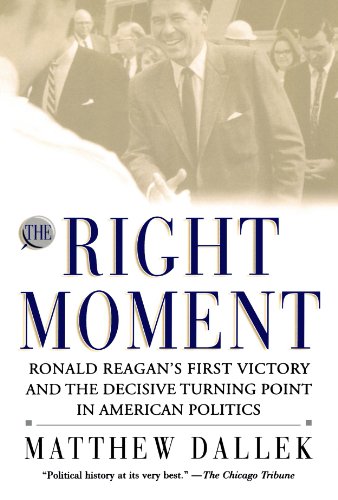 Ronald Reagan's first great victory in the 1966 California governor's race is one of the pivotal stories of American political history, a victory that seemed to come from nowhere and has long since confounded his critics. Just four years earlier Governor Edmund "Pat" Brown was celebrated as the "Giant Killer" for his 1962 victory over Richard Nixon, and his liberal agenda reigned supreme. Yet in 1966 political neophyte Reagan trounced Brown by almost one million votes, marking not only the coming-of-age of Reagan's new conservatism but also the first serious blow to modern liberalism. Drawing on scores of oral histories, thousands of archival documents, and personal interviews with participants, Dallek offers a gripping new portrait of the 1960s that is far more complicated than our collective memory of that decade.

When Ronald Reagan won the Republican nomination for governor of California in 1966, The New York Times called the GOP's decision "against all counsels of common sense and political prudence." That comment probably deserves to go down in history as one of the most spectacularly wrong political assessments ever to appear in a newspaper. As historian Matthew Dallek writes in The Right Moment, his account of Reagan's campaign against Democratic governor Pat Brown, "Ronald Reagan redefined politics like no one since Franklin Roosevelt." The future president's "stunning, out-of-nowhere victory," in which he beat Brown by nearly a million votes, altered the course of American politics for at least a generation: it signaled liberalism's descent into the fatal politics of 1970s McGovernism, announced the rebirth of the conservative movement out of the ashes of Barry Goldwater's crushing defeat two years earlier, and foreshadowed Reagan's greater accomplishments on the national stage.

Before becoming governor, Reagan faced the formidable challenge of persuading mainstream voters that an affable actor could indeed perform effectively as a chief executive. But an even trickier task, in Dallek's telling, was how Reagan rescued the conservative movement from its own extremist elements. There was, for instance, the John Birch Society, a right-wing organization whose thousands of members would form a part of any successful conservative coalition, but whose leaders believed in the plainly absurd idea that President Eisenhower was a Communist agent. Reagan at once had to harness this group's energies and keep his distance from its nuttier beliefs. This he accomplished with a deftly written one-page statement repudiating some of what the group's leaders had alleged and courting their followers at the same time. By zeroing in on this half-forgotten episode of Reagan's career, Dallek shows how the consequences of one election can reverberate throughout the years. This book is almost as much about Pat Brown as it is about Ronald Reagan--fans of Ronald Radosh's Divided They Fell, for instance, will surely enjoy that aspect of it--but most readers will be drawn to The Right Moment for its detailed chronicle of how Reagan got his start in politics. --John J. Miller

Matthew Dallek, a former speechwriter for Richard A. Gephardt, earned his Ph.D. in American History from Columbia University in 1999. His articles and reviews have appeared in The Washington Post, The Atlantic Monthly , The New Republic, and other national publications. He lives in Washington, D.C.