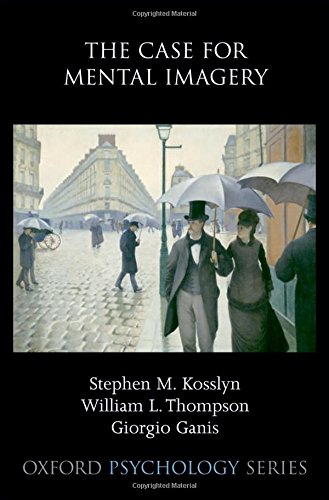 When we try to remember whether we left a window open or closed, do we actually see the window in our mind? If we do, does this mental image play a role in how we think? For almost a century, scientists have debated whether mental images play a functional role in cognition. In The Case for Mental Imagery, Stephen Kosslyn, William Thompson, and Giorgio Ganis present a complete and unified argument that mental images do depict information, and that these depictions do play a functional role in human cognition. They outline a specific theory of how depictive representations are used in information processing, and show how these representations arise from neural processes. To support this theory, they seamlessly weave together conceptual analyses and the many varied empirical findings from cognitive psychology and neuroscience. In doing so, they present the conceptual grounds for positing this type of internal representation and summarize and refute arguments to the contrary. Their argument also serves as a historical review of the imagery debate from its earliest inception to its most recent phases, and provides ample evidence that significant progress has been made in our understanding of mental imagery. In illustrating how scientists think about one of the most difficult problems in psychology and neuroscience, this book goes beyond the debate to explore the nature of cognition and to draw out implications for the study of consciousness. Student and professional researchers in vision science, cognitive psychology, philosophy, and neuroscience will find The Case for Mental Imagery to be an invaluable resource for understanding not only the imagery debate, but also and more broadly, the nature of thought, and how theory and research shape the evolution of scientific debates.

Stephen M. Kosslyn is the former Chair of the Department of Psychology, currently Dean of Social Science and John Lindsley Professor of Psychology at Harvard University. His research focuses primarily on the nature of visual mental imagery, visual perception, and visual communication; he has published 5 previous books and over 275 papers on these topics. Kosslyn has received numerous awards, including the National Academy of Sciences Initiatives in Research Award, a Guggenheim Fellowship, and election to the American Academy of Arts and Sciences.
William L. Thompson received his BA in psychology from McGill University in 1990 and since then has worked in Stephen Kosslyn's laboratory in the Psychology Department at Harvard University. Using the techniques of positron emission tomography (PET) and functional magnetic resonance imaging (fMRI), he has worked on numerous neuroimaging studies, investigating primarily visual mental imagery, but also color perception, hypnosis, and mental rotation. He has co-authored over 30 journal articles and book chapters, including extensive reviews and meta-analyses of the visual mental imagery literature.
Giorgio Ganis has a Ph.D. in Cognitive Science from the University of California at San Diego. He is Assistant Professor in Radiology at the Harvard Medical School and Research Associate in psychology at Harvard University. His research has focused primarily on the neural correlates of visual cognition in humans, and he has published numerous scientific papers on this topic. Ganis has received various awards, including a McDonnell-Pew Program in Cognitive Neuroscience Grant.

"This volume is the most important if not the final word on the great imagery debate. It examines issues critical to all cognition. For example, whether the brain is a general purpose computer and if the brain's structure imposes limits on what can be represented in our minds." Michael I. Posner, Prof. Emeritus University of Oregon

"The Case for Mental Imagery is destined to be a classic text in psychology. [the authors] present an in-depth, philosophically sophisticated, and empirically supported argument that clarifies and settles many of the most contentious issues in the longstanding, decades-long 'imagery debate'...This is an impressive achievement and an outstanding example of the way controversies can be addressed through a combination of sophisticated theoretical concepts paired with expertly conducted scientific research programs."--PsycCRITIQUES
"This is an outstanding book that presents a roadmap of the psychological and neural mechanisms underlying mental imagery. The field of mental imagery has a long and somewhat dark history and the study of the critical cognitive ability has only been considered scientifically legitimate relatively recently. In this book, Kosslyn and colleagues not only summarize the wealth of their own recent scientific findings but elegantly place these findings and their theoretical perspective in the larger historical and contemporary context of studies on mental imagery. The book distills a rich, complicated domain into a series of accessible topics and will serve as an invaluable guide to those entering the field, a refresher for those with passing knowledge, and a major reference for the cognoscenti."--Marlene Behrmann, Professor of Psychology, Carnegie Mellon University
"For centuries, mental imagery has been recognized as one of the keys to understanding human intelligence, emotion, and creativity. Stephen Kosslyn developed the first comprehensive theory of this faculty of mind, and for three decades has explored it with theoretical depth, experimental ingenuity, and a relentless drive to get to the bottom of puzzles and controversies. Kosslyn has now given us a magisterial account of this crucial aspect of mental life. A seamless synthesis of mind and brain, The Case for Mental Imagery is a case of cognitive neuroscience at its finest."--Steven Pinker, Johnstone Family Professor of Psychology, Harvard University
"The definitive treatment of mental imagery from a pictorialist point of view."--Ned Block, Silver Professor of Philosophy and Psychology, New York University