Items related to Stagflation, Savings, and the State: Perspectives on...

Stagflation, Savings, and the State: Perspectives on the Global Economy (A World Bank Research Publication)

Stagflation, Savings, and the State: Perspectives on the Global Economy (A World Bank Research Publication) 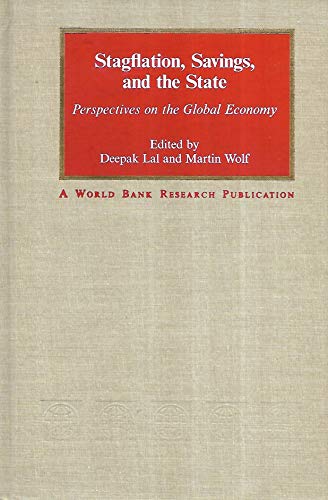 This book provides the intellectual and empirical underpinning for the view that the continuing crisis of the world economy is due to two deep-seated underlying causes, of which the stagflation and rising protectionism in industrial countries and the Third World's debt crisis are dramatic symptoms. The authors show that the roots of the problem lie in the microeconomic rigidities that were steadily built into many economies, and the management of public finances, itself a worldwide problem that portends a global "crowding out" of investment expenditures in developing countries caused by the persistence of transfer payment fueled fiscal deficits in major developed countries.

"Because these essays are of such high quality, they should serve to raise the quality of the debate over neo-liberal diagnosis and policy prescriptions to a high level....A valuable book."--Journal of Developing Areas

"An interesting and useful volume...It portrays very nicely the turbulent years of the world economy since the early 1970s and deals with many of the policy issues involved relating to the impact of shocks, adjustment to shocks, and the debt crisis."--Journal of Development Studies

1. Stagflation, Savings and the State : Perspectives on the Global Economy

Book Description Oxford University Press, Incorporated. Hardcover. Condition: Good. A copy that has been read, but remains in clean condition. All pages are intact, and the cover is intact. The spine may show signs of wear. Pages can include limited notes and highlighting, and the copy can include previous owner inscriptions. An ex-library book and may have standard library stamps and/or stickers. The dust jacket is missing. At ThriftBooks, our motto is: Read More, Spend Less. Seller Inventory # G0195204964I3N11

Book Description Oxford University Press Inc, USA, 1986. Condition: Fair. This book has hardback covers. Ex-library, With usual stamps and markings, In fair condition, suitable as a study copy. Please note the Image in this listing is a stock photo and may not match the covers of the actual item,1100grams, ISBN:0195204964. Seller Inventory # 2494663

Shipping: US$ 12.76
From United Kingdom to U.S.A.
Destination, rates & speeds

4. Stagflation, Savings, and the State: Perspectives on the Global Economy

5. Stagflation, Savings, and the State: Perspectives on the Global Economy (A World Bank research publication)

Shipping: US$ 19.13
From United Kingdom to U.S.A.
Destination, rates & speeds