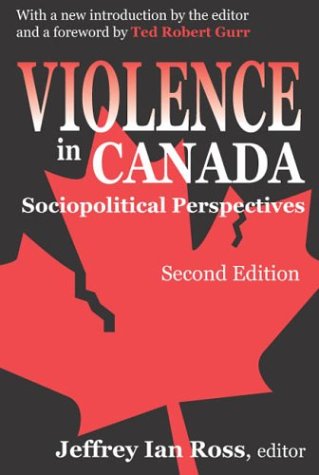 Although Canada is popularly viewed as "the peaceful kingdom", Canadians have never been a thoroughly non-violent people. Violence in Canada highlights the major areas and contexts where violence takes place. A foreword by Ted Robert Gurr (editor of the seminal Violence in America, 3/e) is followed by an account of historical violence on our western frontier. Other scholars describe contemporary violence: by and against aboriginal peoples, women, children, and the elderly; in labor-capital disputes; homicide; police and prison violence; terrorism; and government responses. Jeffrey Ian Ross's introduction outlines the sociopolitical dynamics of violence, and his summary chapter offers directions for future research. The book makes an important contribution to Canadian studies worldwide.

Jeffrey Ian Ross, Ph.D. is a Professor in the School of Criminal Justice, College of Public Affairs, and a Fellow of the Center for International and Comparative Law at the University of Baltimore. He has researched, written, and lectured on national security, political violence, political crime, violent crime, corrections, policing, and crime and justice in Indian Country for over two decades. Ross' work has appeared in many academic journals and books, as well as popular media. He is the author, co-author, editor, or co-editor of several books

Many people consider Canada, particularly in comparison to its southern cousin, as a “peaceable kingdom. However, as the historical record demonstrates, Canadians have never been a thoroughly non-violent people. Violence in Canada highlights from an interdisciplinary perspective the major areas and contexts where violence takes place.

Consisting of thirteen contributions, the book forms an indispensable guide to the subject. All of the authors are experts in their field, many with international reputations, and are drawn from the fields of sociology, political science, history, and criminology. The foreword by Ted Robert Gurr, author of Violence in America, is followed by an historical analysis of violence on the Canadian western frontier. Other scholars describe contemporary violence: by and against indigenous peoples, women, children, and the elderly; in labor-related disputes; homicide; police and prison violence; terrorism; and discuss government responses and policy implications. Each chapter specifically addresses the sociological and political dimensions of violence. The authors make ample use of statistics and empirical research. Jeffrey Ian Ross’s introduction outlines the sociopolitical dynamics of violence, and his summary chapter offers directions for future research. When the book was first published in 1995 it was widely praised by scholarly journals and has since become a standard text in the study of violence and modern Canadian cultural studies.

The book is all the more valuable as its new introduction places its findings in the context of research that has been produced since the original publication. Violence in Canada will be of interest to sociologists, criminologists, and political scientists.

Book Description Oxford University Press, USA, 1995. Condition: Good. 1st Edition. Ships from Reno, NV. Shows some signs of wear, and may have some markings on the inside. Seller Inventory # GRP90492873

Book Description Oxford University Press, Incorporated. Paperback. Condition: As New. An apparently unread copy in perfect condition. Dust cover is intact; pages are clean and are not marred by notes or folds of any kind. At ThriftBooks, our motto is: Read More, Spend Less. Seller Inventory # G0195410580I2N00

Book Description Oxford University Press, Canada, 1995. Condition: Good. This is an ex-library book and may have the usual library/used-book markings inside.This book has hardback covers. In good all round condition. No dust jacket. Please note the Image in this listing is a stock photo and may not match the covers of the actual item,600grams, ISBN:9780195410587. Seller Inventory # 7125578

Shipping: US$ 8.28
From United Kingdom to U.S.A.
Destination, rates & speeds

Shipping: US$ 10.96
From United Kingdom to U.S.A.
Destination, rates & speeds