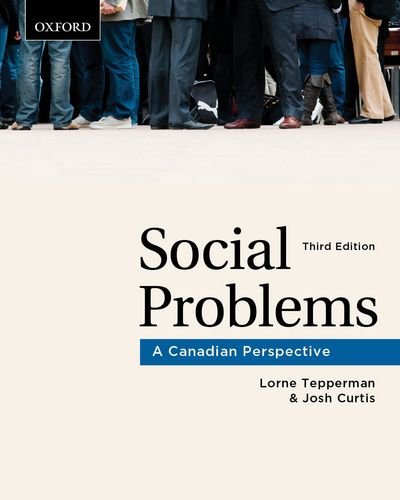 Building upon the foundations students gain in introductory sociology courses,Social Problems: A Canadian Perspective examines the social dynamics and consequences of Canadian and global social problems such as poverty, unemployment, crime, drug abuse, health, war, and terrorism. These problems are discussed and examined through theoretical paradigms such as structural functionalism, conflict and feminist theories, symbolic interactionism, and social constructionism.

Lorne Tepperman is professor of sociology at the University of Toronto. He holds a PhD from Harvard and a certificate in population studies from Princeton. Apart from serving as visiting professor of Canadian studies at Yale, he has spent his career at U of T, from which he graduated with an
honours BA in 1965. He served as chair of the sociology department at U of T from 1997 to 2003. He has also been elected president of the Canadian Sociological Association and has received the CSA's Distinguished Contribution Award.

Josh Curtis is a PhD candidate in the department of sociology at the University of Toronto. His research interests include political sociology, social stratification, and applied statistics. His most recent research includes exploring public opinion data on inequality and redistribution in Canada.
He is also exploring issues surrounding income inequality and credential utilization among ethnic groups in Canada. With his contributions to this text, Curtis is carrying on the work of his father, James Curtis, the original co-author of Social Problems.

"The third edition of Social Problems: A Canadian Perspective is a most welcome update of the highly successful second edition."

". . . a comprehensive treatment of pressing and significant social problems that are very relevant to a Canadian audience. The level of writing is not intimidating for students. . . the information is presented in an accessible and engaging manner."

". . . a thorough, introductory overview of the current sociology in the area of social problems. It is factual, draws on recent research, and presents a solid treatment of social problems. Its Canadian content is important to Canadian students, making the issues more immediate and relevant."
--Ineke Lock, University of Alberta