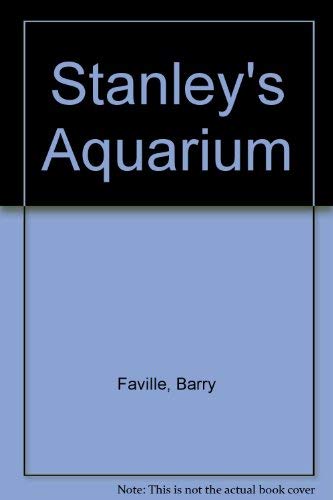 Robbie is sixteen and looking for a weekend job. She finds one, mowing the lawn that encircles a most unusual garden. The garden belongs to a man named Stanley, a rather odd fellow who counts gardening as only one of his hobbies. He also breeds fish, and Robbie grows more and more curious about the shed in the garden where he keeps them. It's just an old shack, But Stanley keeps it under lock and key. And why does she hear sounds of splashes and mad thrashing whenever Stanley goes in to feed his pets?
From the author of The Return and The Keeper, here is a suspensful novel about a remarkable young woman dealing with the pressures of growing up and the frailities and confusion of the adults around her.

BARRY FAVILLE won the 1987 New Zealand Children's Book of the Year Award for his first novel The Keeper, which also was selected by the Society of School Libraries International as "The Best of '88."

Grade 7-9-- Robbie, 17, starts mowing the lawn of Stanley Swinton, a bizarre old man with smallpox scars and jungle stories. He has transformed his backyard into a jungle, complete with a shed in which he pursues his hobby of fish-breeding. Robbie discovers that the fish are man-eating piranha, and that Stanley's mission, realized in the book's chilling conclusion, is to introduce them into the local lake. Subplots are interwoven: Robbie's brother's death; her boyfriend's fatal car accident; Stanley's attempt to molest her sexually; and the Swintons' lies about their daughter. While some of the emotions generated by these issues are presented realistically, the numerous unresolved subplots weaken the book, and readers are left hanging. Difficult literary references, as well as the colloquial expressions and dialect of the interesting New Zealand setting, make the first-person narrative less than accessible. --Connie Tyrrell Burns, Mahoney Middle School, South Portland, ME
Copyright 1991 Reed Business Information, Inc.

Book Description Oxford University Press, Incorporated. Hardcover. Condition: Good. A copy that has been read, but remains in clean condition. All pages are intact, and the cover is intact. The spine may show signs of wear. Pages can include limited notes and highlighting, and the copy can include previous owner inscriptions. The dust jacket is missing. At ThriftBooks, our motto is: Read More, Spend Less. Seller Inventory # G0195581970I3N01

Book Description Oxford University Press, 1990. Hardcover. Condition: Good. MAY OR MAY NOT HAVE A DUST JACKET Usual signs of a well read book but good overall condition. May not look good on your bookcase after reading and probably not suitable as a present unless hard to find elsewhere MOST IMAGES ARE STOCK PHOTOS. IF YOU NEED A PARTICULAR EDITION PLEASE SEND US A MESSAGE BEFORE PURCHASING SO THAT WE CAN CHECK THAT THE ONE ON OFFER IS THE ONE YOU REQUIRE. SECURE DAILY POSTING FROM UK. 30 DAY GUARANTEE. Seller Inventory # mon0002752648

Book Description Oxford University Press, 1990. Condition: Good. A+ Customer service! Satisfaction Guaranteed! Book is in Used-Good condition. Pages and cover are clean and intact. Used items may not include supplementary materials such as CDs or access codes. May show signs of minor shelf wear and contain limited notes and highlighting. Seller Inventory # 0195581970-2-4