Items related to A Vedic Reader for Students

A Vedic Reader for Students 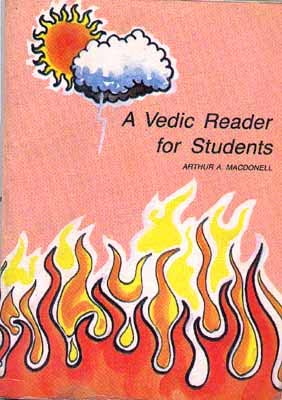 This reader contains thirty hymns of the Rigveda in the original Samhita and Pada texts, with transliteration, translation, explanatory notes, an introduction, and vocabulary. Designed as a companion volume to Macdonell's Vedic Grammar for Students, it is designed primarily for students who, while acquainted with Classical Sanskrit, are beginners in Vedic.

Macdonell was born in India and educated at Gottingen University, then matriculated in 1876 at Corpus Christi College, Oxford, gaining a classical exhibition and three scholarships (for German, Sanskrit, and Chinese). He graduated with classical honours in 1880 and was appointed Taylorian Teacher of German at Oxford. In 1883 he obtained his Ph.D. from the University of Leipzig, and then became Deputy Professor of Sanskrit at Oxford in 1888, and Boden Professor of Sanskrit in 1899.

Macdonell edited various Sanskrit texts, wrote a grammar, compiled a dictionary, published a work on Vedic Mythology, and a wrote a history of Sanskrit." (Quote from wikipedia.org)

1. A Vedric Reader for Students

Book Description Oxford University Press, Oxford, 1988. Paperback. Condition: Good. Paperback in good condition. Fourteenth impression 1988. Minor marks and shelfwear to the cover. A few minor dents on the cover, slightly affecting the pages within. The laminate is a little creased on the spine. Faint marks on the page block. Label on inside front cover. The binding is sound; all text is clear. CM. Used. Seller Inventory # 471734

2. A VEDIC READER FOR STUDENTS Containing Thirty Hymns of the Rigveda in the Original Samhita and Pada Texts, with Transliteration, Translation, Explanatory Notes, Introduction, Vocabulary

3. A Vedic Reader for Students

Shipping: US$ 19.57
From United Kingdom to U.S.A.
Destination, rates & speeds