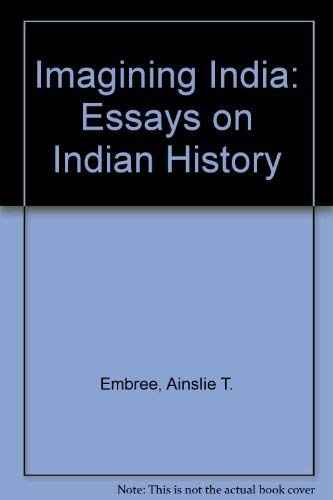 In this illuminating collection of essays, Ainslee Embree examines the impact of foreign perceptions of India on both the foreigners and the people of India. Studying the complex interplay of indigenous Indian culture with Islamic and western civilizations, he argues that civilization is not a fixed residue handed down from the past, but rather an enduring structure with adaptive mechanisms that permit it to be both a historically determined and continuously creative force. An incisive study by one of North America's leading historians, Imagining India will be of interest to historians of modern India, political scientists, and anyone with an interest in contemporary Indian life.

Book Description OUP India, Delhi, India, 1989. Hardcover. Condition: Very Good. Dust Jacket Condition: Good. 1st Edition. Blue cloth covered boards with gilt titling to spine. The spine is a bit pronounced which gives the book a slightly crushed look, but this might be due more to Indian production quality than mistreatment. Text pages are all clean and clear with no markings or inscriptions. D/J is complete with no tears or creasing, but does have some rubbing to top edge and a touch of sunning to spine. Protected now in removable clear cover. Despatched same or next working day in protective packaging. Seller Inventory # 007128