Items related to Facsimile of Foxe's Book of Martyrs, 1583: Actes...

Facsimile of Foxe's Book of Martyrs, 1583: Actes and Monuments of Matters Most Speciall and Memorable: Version 1.0 on CD-ROM Single User Version 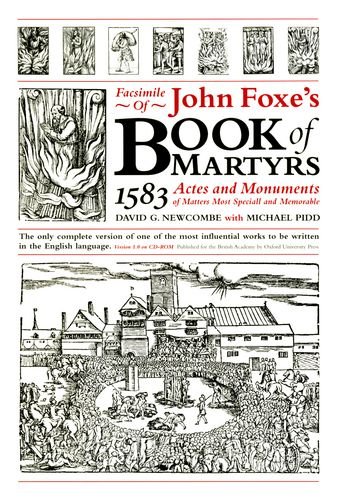 Foxe's Actes and Monuments of Matters Most Speciall and Memorable is one of the foundation-stones of English protestant national identity. Over twenty-five years, and in more than 2,500,000 words, Foxe compiled his history of the church in order to demonstrate that protestantism was the true faith. His message shaped English religious and political consciousness for centuries to come with enormous consequences, and the book was second only to the vernacular Bible as a formative influence on English language and culture.
The 1583 edition was the last for which Foxe was personally responsible. Assembled from two separate originals, this facsimile on CD-ROM provides the only complete version available. The CD-ROM combines readable and printable images of the 2,200 pages of text and woodcut engravings from the complete edition. The illustrations are displayed as very high resolution facsimiles (400 dots per inch) and there is a searchable transcription of Foxe's own index and calendar which catalogues and links to the text and woodcuts. The CD-ROM comes complete with installation instructions and full on-screen help.

John Foxe (1516-87) was a professor at Oxford, then a minister in London before being forced to flee to Europe when Queen Mary came to power. While in Europe he wrote this classic and published it after returning to England when Queen Elizabeth took the throne.

This CD-ROM is a major step in the publication programme of the John Foxe Project which is doing so much to aid understanding and discussion of one of the most important books published in the sixteenth century. Journal of Ecclesiastical History The value of Foxe's text to historians and theologians is undiminished ... The Book of Martyrs is also invaluable both as a mirror to the times in which it was written and rewritten, and as one of the formative documents of Puritan England. Such considerations led to the recent establishment of the British Academy's John Foxe project .. this CD-ROM is one of the project's interim products ... Foxe's own index has been equipped with a search engine and hyperlinks, so that limited searches for major topics or key individuals can be carried out ... It is simply constructed and easy to use for technophobes. Journal of Theological Studies