Items related to William Shakespeare: The Complete Works ([The Oxford... 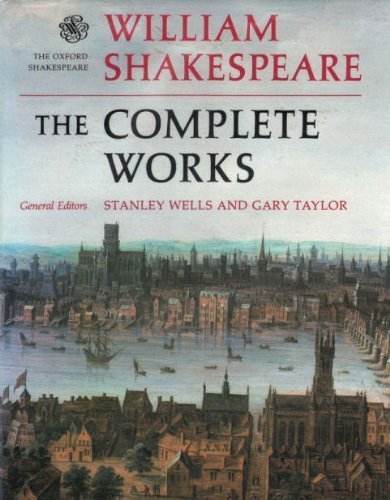 This beautiful new edition of Shakespeare's complete works--"The Oxford Shakespeare"--is the product of eight years of full-time research by a team of British and American scholars and represents the most thorough examination ever undertaken of the nature and authority of the early documents.
The edition abounds in unique features. It is the first volume to provide edited texts of King Lear both as Shakespeare originally wrote it and as it was revised for performance somes years later. Other plays, such as Hamlet, Othello, and Troilus and Cressida, are based on what recent research identifies as Shakespeare's revised text. Major textual alternatives--first versions of revised passages, omitted lines--are printed as additional passages. All stage directions have been reconsidered in light of original staging, and many new directions for essential action have been added. Specially designed brackets idenify conjectural stage direction and speech prefixes. In most respects, the text is identical to that of the "old-spelling" edition, but spelling and punctuation have been freshly modernized. There is a General Introduction along with brief, factual introductions to each work.
Elegantly (and Readably) designed, this book will undoubtedly become a treasure for lovers of Shakespeare throughout the English-speaking world.

s reputation as a playwright overshadows the fact that he was perhaps an even greater poet. This selection of his poetry -- sonnets, and songs and verse from the plays, some justly familiar, others less known -- offers the quintessence of his remarkable art and provides an enticing introduction to his work.

The songs and sonnets are accompanied by Elizabethan miniatures and illuminated manuscripts, the verse from plays is accompanied by paintings of the nineteenth century.