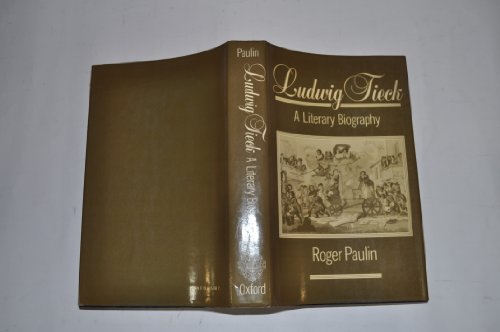 Ludwig Tieck (1773-1853) was a major figure in German cultural life, a poet, playwright, and novelist who was also an influential art and theater critic, the editor of Kleist and Novalis, and the prime force behind the famous Schegel-Tieck translation of Shakespeare. His was a long and prolific career, which began in the last decades of Frederick the Great's reign, and ended in the aftermath of the 1848 Revolution, and his varied literary output reflected the progress and the shifting emphasis of the Romantic movement. In this biography, Roger Paulin attempts to capture, through the study of the work of this remarkable man, the climate of Romanticism, tracing its progress from a movement of aesthetic protest to one of national awareness.

Book Description Oxford University Press, 1985. Condition: Good. A+ Customer service! Satisfaction Guaranteed! Book is in Used-Good condition. Pages and cover are clean and intact. Used items may not include supplementary materials such as CDs or access codes. May show signs of minor shelf wear and contain limited notes and highlighting. Seller Inventory # 0198157967-2-4