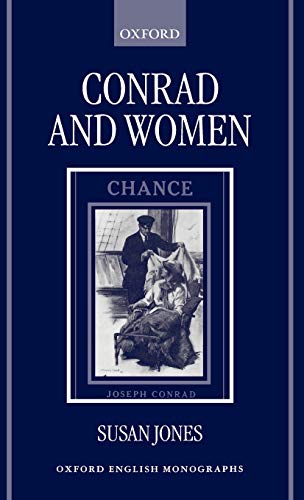 This book challenges the traditional image of Joseph Conrad as writer of the sea, a man in a man's world. It re-establishes the importance of significant women in his life, and his engagement with women's writing. Rethinking received views of Conrad as a modernist writer, it also explores the experimentation of his later, less familiar works, first published in the women's pages of popular journals.

"Carefully researched and far-ranging... [An] ambitious and largely successful reconsideration of [Conrad's] life and work.... Conrad and Women offers much to broaden our perspective on Conrad.... Most importantly, Jones's book helps to open Conrad's writing to the wider audience he himself sought."--English Literature in Transition 1880-1920

Book Description Oxford University Press, United Kingdom, 2000. Hardback. Condition: New. New. Language: English. Brand new Book. Supported by an enduring critical paradigm, the traditional account of Conrads career privileges his public image as man of the sea, addressing himself to a male audience and male concerns. This book challenges received assumptions by recovering Conrad's relationship to women not only in his life but in his fiction and among his readers. The existing interplay of criticism, biography, and marketing has contributed to a masculinist image associated with a narrow bodyof modernist texts. Instead, Susan Jones reinstates the female influences arising from his early Polish life and culture; his friendship with the French writer Marguerite Poradowska; his engagement with popular women's writing; and his experimentation with visuality as his later works appear in thevisual contexts of womens pages of popular journals. By foregrounding less familiar novels such as Chance (1913) and the neglected Suspense (unfinished and published posthumously, 1925), she emphasises the range and continuity of Conrad's concerns, showing that his later discussions of gender and genre often originate in the period of the great sea tales. Conrad also emerges as an acute reader and critic of popular forms, while his unexpected entry into important contemporarydebates about female identity invites us to rethink the nature of his contribution to modernism. Seller Inventory # LHB9780198184485

Shipping: US$ 18.12
From United Kingdom to U.S.A.
Destination, rates & speeds