Items related to The Oxford Illustrated History of the Crusades (Oxford... 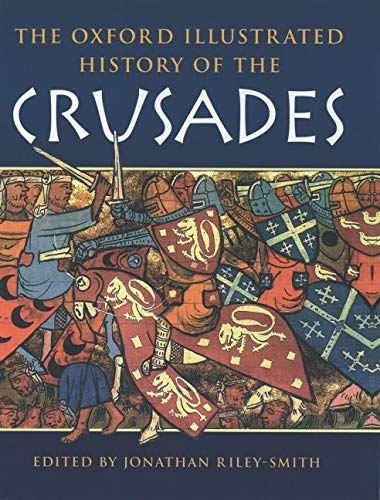 Nine hundred years ago, at a church council in Clermont, Pope Urban II delivered an impassioned sermon, calling upon Frankish knights to vow to march to the East to free Christians from the yoke of Islamic rule and to liberate the tomb of Christ, the Holy Sepulchre in Jerusalem, from Muslim control. Thus began the Crusades: the bloody and grueling battles pitched between European knights and the Islamic defenders over the course of two hundred years, movements that created the legends of King Arthur and the Holy Grail, military orders such as the Knights Templar, and an unusually rich tradition of art and architecture.
In The Oxford Illustrated History of the Crusades, the story of the Crusades is told as never before in an engrossing, authoritative, and comprehensive history that ranges from the preaching of the First Crusade in 1095 to the legacy of the crusading ideals and imagery that continues today. Here are the ideas of apologists, propagandists, and poets about the Crusades, as well as the perceptions and motives of the crusaders themselves and the means by which they joined the movement--crusaders were required to "take the cross" (which involved making a vow, often at an emotional public gatherings under the influence of preachers whose business it was to whip their audiences up into a frenzy) and were foresworn to wear a cross on their clothing until they returned from their mission in the East. The authors describe the elaborate social and civic systems that arose to support the Crusades--taxation, for example, was formalized by the Church and monarchs to raise enormous funds needed to wage war on this scale; nearly 1,000,000 livres tournois were raised from the French church (out of estimated total expenses of some 3,000,000 livres) for Louis IX's first crusade in 1248. And here are vivid descriptions of the battles themselves, frightening, disorienting, and dangerous affairs, with keen and insightful commentary on the reactions of the Muslims to a Christian holy war. Extensively illustrated with hundreds of illustrations, maps, chronologies, and a guide to further reading, The Oxford Illustrated History of the Crusades even includes coverage of crusades outside the eastern Mediterranean region and post-medieval crusades.
From descriptions of the battles and homefront conditions, to a throrough evaluation of the clash (and coalescence) of cultures, to the legacy of the crusading movement that continues into our conflict-torn twentieth-century, to the enduring artistic and social changes that the Crusades wrought, The Oxford Illustrated History of the Crusades offers an unsurpassed panorama of one of the great movements in western history. This beautiful work will engage and inform anyone with an interest in the Crusades.

About the Editor:
Jonathan Riley-Smith is Dixie Professor of Ecclesiastical History at the University of Cambridge and is one of the world's leading authorities on the Crusades. He is the author or editor of a number of books including The Atlas of the Crusades and The Crusades: A Short History

In 1095 Pope Urban II granted absolutions to whomever would reclaim the Holy Land for Christendom. With that assurance began two centuries of Crusades, and the story, in contemporary chronicles, artwork, and castellated ruins, is well treated in this interpretation of the movement to take up the cross. The subject has stirred from historiographical dormancy, says editor Riley-Smith, who ably introduces the definitional questions--What is a Crusade? Who became a Crusader?--and then turns the chapters over to a dozen specialists. They analyze in detail the complex religious, economic, and military aspects, emphasizing the immediate instigation of one Crusade or another--often a Muslim counter-Crusade like Saladin's recapture of Jerusalem in 1187--while reiterating the profound piety and concern for salvation on which the whole process rested. It seems an odd combination of compassion and conquest, aptly expressed in knightly orders such as Hospitallers or the Teutonic Order, so elusive to the modern sensibility. These historians, though, dissolve that psychological barrier, interpreting what impelled the pilgrims, the Muslim reaction, and the political course of holy conflict up through the fall of the last Crusader polity--Malta--in 1798. Gilbert Taylor