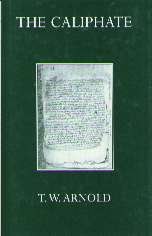 Sir Thomas Arnold was a renowned Islamic scholar and historian whose first book, The preaching of Islam (1896), was influential in disseminating a fuller understanding of Islam in the West. This history the Caliphate, first published in 1924, approaches the culturally distant subject of the Islamic political order with an infectious intellectual enthusiasm and with a great facility for riding the religious and cultural divide. The book begins with the first 'Successors to the Prophet', Abu Baker and "Umar, explaining both political events and the theological sanction of the caliphate in the Qu'ran and the 'Traditions,' (Hadith). The religious and philosophical significance of the titles Caliph, Amir (commander) and imam (leader) are constant themes as Arnold traces the history of the (Sunni) caliphate through the Umayyad and Abbasid dynasties and Ottoman rule, to Turkey's abolition fo the ancient office in 1924. Shia doctrines are discussed in an appendix.