Items related to Fit for Service: The Training of the British Army,... 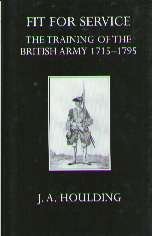 In Fit For Service Professor Houlding successfully demonstrates traditional arguments that purchasing officer commissions and lack of drill regulations were not the cause of poor results in the first campaign each year of war from 1715 to 1795. His exhaustive research of marching orders, drill books, civil reports show that the army was largely hamstrung by its duties as what amounted to military police. The army was used to quell food riots, support revenue agents against smugglers, even protect the gentry's estates. The army was distributed in small units across the country for a number of reasons starting with the long-standing fear of a standing army. Houlding shows that battalion commanders (Lieutenant Colonels) rarely had the opportunity to bring together even half of their men to practice. Consequently, it took a "campaign season" to prepare both men and commanders to work in larger bodies.