Items related to The Seventh-day Men: Sabbatarians and Sabbatarianism...

Ball, Bryan W. The Seventh-day Men: Sabbatarians and Sabbatarianism in England and Wales, 1600-1800

The Seventh-day Men: Sabbatarians and Sabbatarianism in England and Wales, 1600-1800 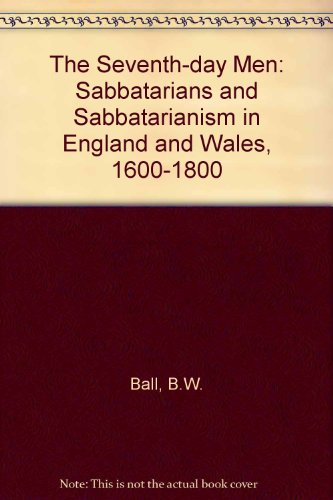 "Seventh-Day Men" was the seventeenth-century name given to an emerging and important body of Christians who believed in the strict observance of Saturday, rather than Sunday, as the Sabbath. This is the first-ever fully documented study of these people, who in their heyday were at the center of debate and controversy among the leading writers of the age. This study provides clear evidence that this sabbatarian body of Christians was far more extensive than has so far been recognized, and establishes its considerable significance within the history of the church in the period.

'The Seventh-day Men' - this name was given by contemporaries in the seventeenth and eighteenth centuries to an emerging and increasingly widespread body of Christians who observed Saturday, not Sunday, as the divinely appointed day of rest and worship. This book is the first fully documented history of the Sabbatarian movement in England and Wales in the two centuries following the Reformation. Drawing on many rare manuscripts and printed works, Dr Ball provides clear evidence that the movement was much more extensive than has so far been recognized, appearing in more than thirty counties, and that in its heyday in the seventeenth century it attracted the attention of many influential writers and controversialists. Dr Ball suggests that the origins of the movement can be traced back through the medieval Lollards as far, perhaps, as the Celtic tradition, and shows that the first 'modern' Sabbatarian appeared as early as 1402. He also looks at the reasons for the movement's decline in the eighteenth century. As the first comprehensive study of the subject, this book establishes the Sabbatarian movement as a significant strand of thought in the history of English Nonconformity, with considerable influence on the religious life of the period. This will be a book of value and interest to all historians of the church and of the religious developments of the early modern period in England and Wales.

Dr Bryan Ball is President of the South Pacific Division of the Seventh-day Adventist Church.

2. The Seventh-day Men: Sabbatarians and Sabbatarianism in England and Wales, 1600-1800

Book Description Oxford University Press, USA, 1994. Condition: Good. Former Library book. Shows some signs of wear, and may have some markings on the inside. Seller Inventory # GRP18525373

Book Description Oxford University ( Clarendon ) Press, Oxford, 1994. Hard Cover. Condition: Fine. Dust Jacket Condition: Near Fine. Illustrated with 4 facsimiles, and 7 maps. (illustrator). First Edition. OXFORD : 1994. FIRST EDITION. Illustrated with 4 facsimiles, and 7 maps. Hardback. Dark blue cloth. Gilt lettered spine. In dark red printed dust-jacket. No owner name or internal markings. Tight, bright and clean. FINE in Near Fine jacket. Jacket now in an archival quality clear protective sleeve. (xv), 400 pages. Index. Includes bibliography: p357-379.(xi),402 pages. Scarce. CONTENTS : Introduction; 1. Precedents and Antecedents; 2. John Traske and Theophilus Brabourne; 3. The Mill Yard Church; 4. The London Calvanistic and Sabbatarian Churches; 5. The South and South West; 6. The Chilterns and the Thames Valley; 7. The Cotswolds and Severn Valley; 8. South Wales and the Borders; 9. East Anglia; 10: The Northern Counties; Conclusion; Appendices I-V; Bibliography; Indices. SUMMARY: 'Seventh-day men' was the name given to a 17th-century body of Christians who believed in the strict observance of Saturday, not Sunday, as the Sabbath. This is a fully documented study of a movement that was in its heyday the centre of debate and controversy among the leading writers of the age. The study provides clear evidence that this Sabbatarian body was far more extensive than has so far been recognized, and establishes its considerable significance within the history of the Church in the period. SCARCE. . [ Rosley Books for Antiquarian books, Literature, Theology and History. ] Size: 8vo. Seller Inventory # 0021025

4. The Seventh-day Men: Sabbatarians and Sabbatarianism in England and Wales, 1600-1800

Book Description Oxford University Press, 1994. Condition: Good. A+ Customer service! Satisfaction Guaranteed! Book is in Used-Good condition. Pages and cover are clean and intact. Used items may not include supplementary materials such as CDs or access codes. May show signs of minor shelf wear and contain limited notes and highlighting. Seller Inventory # 0198267525-2-4