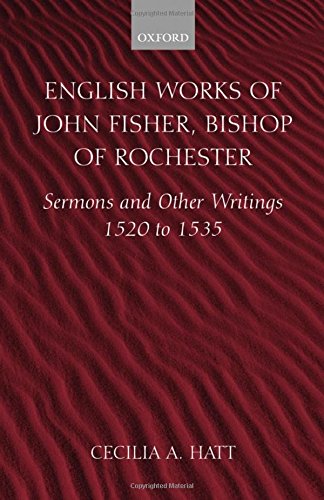 Bishop John Fisher was a scholar and theologian of European reputation, famous as a preacher and author of the first sermon-sequence to be printed in English. He was beheaded for his opposition to Henry VIII's divorce from Catherine of Aragon and pursued after his death by the enmity of the king, who suppressed his books and sought to blacken his name. John Fisher's English writings are distinctive for their structured elegance and clarity. This new edition contains sermons written during the last fifteen years of Fisher's life, including a previously unpublished eyewitness account of the Field of Cloth of Gold celebrations, and devotional works composed while he was a prisoner in the Tower of London.

Hatt's work is to be welcomed for drawing our attention afresh to Fisher's writings. * English Historical Review * Hatt's book adds considerably to our knowledge. Moreover, she gives us a very useful collection of primary resources and allows historians a firmer grasp of Fisher's real importance ... graduate students and researchers are handed a real gem. * Sixteenth Century Journal * This book has much to recommend it. Not only does it contain several works of primary importance, but it takes the reader through a detailed analysis of Fisher's motivations and thought processes. * Sixteenth Century Journal * The many commentaries are unfailingly excellent. This book should be read by anyone with an interest in Fisher, the English episcopate and clergy, or anyone interested in religious change and the reformation of the early modern period. * Sixteenth Century Journal * ... admirable for its organization ... Fisher's work is submitted to the meticulous handling of modern scholarship, each and every text receiving both a critical introduction providing context and historiography, followed by pages of fruitful commentary. * The Journal of Theological Studies *

1. English Works of John Fisher, Bishop of Rochester. Sermons and Other Writings 1520 to 1535.

Shipping: US$ 24.44
From Netherlands to U.S.A.
Destination, rates & speeds