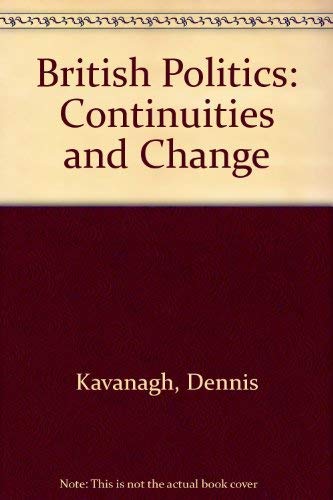 This new edition of "British Politics" is a comprehensive textbook which not only describes but also evaluates the British system of politics and government in modern politics science terms. Dennis Kavanagh examines the historical, constitutional, and cultural context of British politics. He deals with the familiar topics of the Cabinet, Parliament, the Civil Service, parties, pressure groups and local government. In addition he discusses often neglected issues such as political culture, corporatism, the police and judiciary, the mass media, political recruitment and political style, and the politics of economic decline. The concluding chapters consider the policy process and discuss the question of political power and the state of politics in Britain at the moment.

Dennis Kavanagh is Professor of Politics at the University of Liverpool.

From the second edition: "A thorough and balanced study."--Times Educational Supplement

Book Description Oxford University Press, 1990. Condition: Good. A+ Customer service! Satisfaction Guaranteed! Book is in Used-Good condition. Pages and cover are clean and intact. Used items may not include supplementary materials such as CDs or access codes. May show signs of minor shelf wear and contain limited notes and highlighting. Seller Inventory # 0198277571-2-4