Items related to A Market Theory of Money

A Market Theory of Money 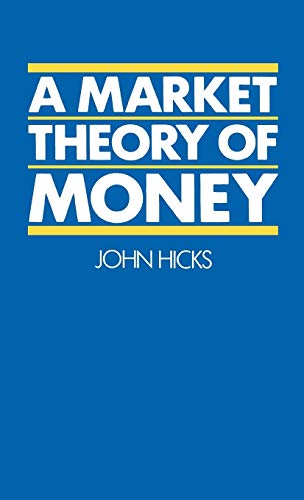 In this book Nobel Laureate Sir John Hicks draws together the common threads of over fifty years of writing on monetary economics into a succinct statement of the fundamentals of monetary theory. Confronting the failure of both standard classical and neoclassical theory to fill the gap between monetary and non-monetary economics, he posits an idea of competitive markets that can be linked to the monetary sector, and explains the way in which economic theory has been adjusted to reflect developments in the real economy.

"A Market Theory of Money is more than just a rennovation of past ideas. It offers a new interpretation of the business cycle, and an explanation of the differences between British and American economic systems."--Southern Economic Journal

"Clearly destined to take on a special significance to historians of thought as the final contribution of one of the most influential economists of the twentieth century....Achieves everything that Hicks' admirers could have hoped, and represents a remarkable accomplishment....Remarkably, even in the course of a short theoretical work, Hicks is able to draw a number of important policy conclusions."--Eastern Economic Journal
"Strongly recommended for upper-division and graduate collections."--Choice

1. A Market Theory of Money

2. A Market Theory of Money

3. A Market Theory of Money (Hardback)

Book Description Oxford University Press, United Kingdom, 1989. Hardback. Condition: New. New. Language: English. Brand new Book. John Hicks's writing on monetary economics spans over 50 years. This book draws together the common threads of his work in a single succinct statement of the basics of monetary theory. It also outlines a theory of competitive markets which can be linked to the monetary sector; neither standard classical or neo-classical value theory can , on its own, fill the gap between monetary and non-monetary economics.In reviewing his own work, Hicks explains the way in which economic theory has been adjusted to reflect developments in the real economy. He sees these changes, sometimes quite major, as the discovery of truths which have become more appropriate, rather than the the discovery of completely new truths. Seller Inventory # LHB9780198287247

7. A Market Theory of Money

8. A Market Theory of Money