Items related to Electrodynamics From Ampčre To Einstein

Electrodynamics From Ampčre To Einstein 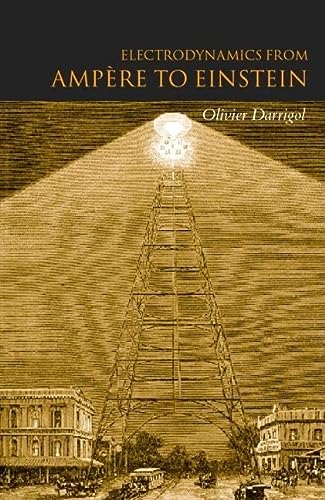 Three quarters of a century elapsed between Ampère's definition of electrodynamics and Einstein's reform of the concepts of space and time. The two events occurred in utterly different worlds: the French Academy of Sciences of the 1820s seems very remote from the Bern patent office of the early 1900s, and the forces between two electric currents quite foreign to the optical synchronization of clocks. Yet Ampère's electrodynamics and Einstein's relativity are firmly connected through an historical chain involving German extensions of Ampère's work, competition with British field conceptions, Dutch synthesis, and fin de siècle criticism of the aether-matter connection. Darrigol's book retraces this intriguing evolution, with a physicist's attention to conceptual and instrumental developments, and with an historian's awareness of their cultural and material embeddings. This book exploits a wide range of sources, and incorporates the many important insights of other scholars. Thorough accounts are given of crucial episodes such as Faraday's redefinition of charge and current, the genesis of Maxwell's field equations, or Hertz' experiments on fast electric oscillations. Thus emerges a vivid picture of the intellectual and instrumental variety of nineteenth century physics. The most influential investigators worked at the crossroads between different disciplines and traditions: they did not separate theory from experiment, they frequently drew on competing traditions, and their scientific interests extended beyond physics into chemistry, mathematics, physiology, and other areas. By bringing out these important features, this book offers a tightly connected and yet sharply contrasted view of early electrodynamics.

"Darrigol has managed to get beyond the controversy and the confusion, assembling an interesting, coherent, and convincing narrative. By taking the best from the various scholars that have contributed to the field, by discarding the dross with a minimum of fuss and bother, and by adding his own substantial research as well as his own synthetic vision, Darrigol has crafted a history of electromagnetic experiment and theory in the 19th century that represents the best the history-of-physics enterprise has to offer."--Daniel M. Siegel, Physics Today

"The detailed analysis and understanding of the eighty or so years of endeavor which led form 'Ampere to Einstein' has been the daunting tasks that Professor Olivier Darrigol has set himself. I must admit that I find it extremely difficult to do justice in a brief review to this monumental work of scholarship...Darrigol's monograph is a highly detailed and mathematical account of the historical development of electromagnetism..."--European Journal of Physics
"The scope of Olivier Darrigol's impressive treatise arouses both surprise and admiration...Darrigol offers a richly textured narrative, painstaking in its attention to detail and compelling in conceptual thrust, a work which will repay attention by historians and philosophers of physics...Darrigol builds massively and impressively on contemporary scholarship on the history of 19th-century physics."--Studies in History and Philosophy of Modern Physics

1. Electrodynamics from AmpĂ¨re to Einstein

2. Electrodynamics From AmpĂ¨re To Einstein

3. Electrodynamics from Ampčre to Einstein

4. Electrodynamics from Ampere to Einstein

Shipping: US$ 45.77
From United Kingdom to U.S.A.
Destination, rates & speeds