Items related to Oxygen: The Molecule that Made the World

Lane, Nick Oxygen: The Molecule that Made the World

Oxygen: The Molecule that Made the World 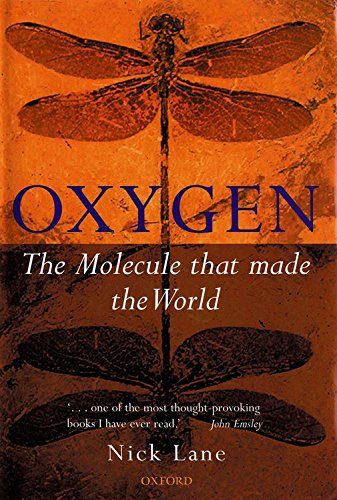 Three hundred million years ago, dragonflies grew as big as seagulls, with wingspans nearly a yard across. Researchers claim they could have flown only if the air had contained more oxygen than today-probably as much as 35 per cent. But oxygen is a toxic gas. Fruit flies raised at twice the normal level of oxygen live half as long as their siblings. If atmospheric oxygen reached 35 per cent in the Carboniferous, why did oxygen promote exuberant growth, instead of rapid aging and death?
This is just one of the puzzles Nick Lane answers in Oxygen. Lane takes the reader on an enthralling journey, as gripping as a thriller, as he unravels the unexpected ways in which oxygen spurred the evolution of life and death. The book explains far more than the size of ancient insects: it shows how oxygen underpins the origin of biological complexity, the birth of photosynthesis, the sudden evolution of animals, the need for two sexes, the accelerated aging of cloned animals like Dolly the sheep, and the surprisingly long lives of bats and birds. Drawing on this grand evolutionary canvas, Oxygen offers fresh perspectives on our own lives and deaths, explaining modern killer diseases, why we age, and what we can do about it.
Advancing revelatory new ideas, following chains of evidence, the book ranges through many disciplines, from environmental sciences to molecular medicine. The result is a captivating vision of contemporary science and a humane synthesis of our place in nature. This remarkable book will redefine the way we think about the world.

Nick Lane is an honorary research fellow at University College London and strategic director at Adelphi MediCine, a medical multimedia company based in London. His writings have appeared in numerous international journals, including Scientific American, The Lancet, and the British Medical Journal. He lives in London.

Nick Lane, the author of Oxygen, studied biochemistry at the University of London and did his doctoral research on oxygen free radicals at the Royal Free Hospital in London, but then left science to become the director of a multimedia company involved to a certain extent in medical education. His background suffuses this book, both for better and for worse. Apart from the first chapter, which is cast in a style approaching the juvenile, the book is very well written and easy to read. Lane makes his points clearly, and his lines of reasoning are well developed. The first half of the book is a very interesting and well-thought-out analysis of evolution, starting from the Archean eon and carrying on through the appearance of multicellular eukaryotes, such as humans. There is some awkward writing: "oxygen-hating" this and that, "first ever ice age," and a strained analogy about opinionated newspaper proprietors. Early in the book there are three or four statements that look like errors, but they are corrected later in the book. Of considerable interest, however, are Lane's remarks about chlorophyll arising from purple bacteria. Even more interesting is his comment to the effect that the oxygen-evolving complex in plants arose from an adaptation of catalase. He astutely points out that Fridovich's discovery of superoxide dismutase was "the most important discovery in modern biology never to win the Nobel Prize," a sentiment with which I heartily concur. The second half of the book begins with an excellent chapter on vitamin C, in which the author appropriately describes the outstanding work of Mark Levine and quotes Linus Pauling: "I would trust the biochemistry of a goat over the advice of a doctor." But subsequently, there is a mistake: Sue-Goo Rhee is referred to as a woman, when in fact he is a man. The rest of the second half, though informative in many places, is chiefly a buildup to the author's own theory -- namely, that aging itself is due exclusively to the damage caused by the leakage of oxygen radicals from aging mitochondria. In the course of the book, Lane takes a couple of shots at scientists for working on little pictures instead of the big picture. He takes little cognizance of the fact that big pictures, including the cause of aging, are made by the assembly of little pictures and that his own theory, probably only in part correct, was derived from many little pictures. He cites a few articles that support his idea but none that oppose it. Despite the inclusion of a small number of references, the book is not a perfect work of scholarship. But it is not meant to be one. It is a thought-provoking popularization of evolution and oxygen biochemistry, and I'm glad I read it. Its shortcomings notwithstanding, I can recommend the book strongly because of its informational content and its breezy and accessible style. It has to be read, though, with eyes open. Bernard M. Babior, M.D., Ph.D.
Copyright © 2003 Massachusetts Medical Society. All rights reserved. The New England Journal of Medicine is a registered trademark of the MMS.

1. Oxygen: The Molecule that Made the World

2. Oxygen: The Molecule that Made the World

3. Oxygen: The Molecule that Made the World Lane, Nick

4. Oxygen: The Molecule that Made the World Lane, Nick

5. Oxygen: The Molecule that Made the World Lane, Nick