Items related to Impossibility : The Limits of Science and the Science...

Barrow, John D. Impossibility : The Limits of Science and the Science of Limits

Impossibility : The Limits of Science and the Science of Limits 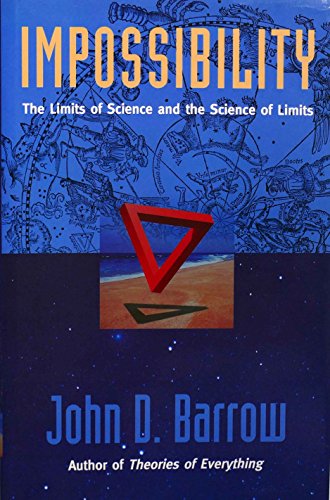 John Barrow is increasingly recognized as one of our most elegant and accomplished science writers, a brilliant commentator on cosmology, mathematics, and modern physics. Barrow now tackles the heady topic of impossibility, in perhaps his strongest book yet.
Writing with grace and insight, Barrow argues convincingly that there are limits to human discovery, that there are things that are ultimately unknowable, undoable, or unreachable. He first examines the limits on scientific inquiry imposed by the deficiencies of the human mind: our brain evolved to meet the demands of our immediate environment, Barrow notes, and much that lies outside this small circle may also lie outside our understanding. Barrow investigates practical impossibilities, such as those imposed by complexity, uncomputability, or the finiteness of time, space, and resources. Is the universe finite or infinite? Can information be transmitted faster than the speed of light? The book also examines the deeper theoretical restrictions on our ability to know, including Godel's theorem--which proved that there were things that could not be proved--and Arrow's Impossibility theorem about democratic voting systems. Finally, having explored the limits imposed on us from without, Barrow considers whether there are limits we should impose upon ourselves. For instance, if the secrets of the atom are to be found only by recreating extreme environments at great financial cost, just how much should we devote to that quest?
Weaving together this intriguing tapestry, he illuminates some of the most profound questions of science, from the possibility of time travel to the very structure of the universe.

Perhaps it's a harbinger of the end of science that so much attention is being paid to the impossible. In Impossibility, astronomer John D. Barrow outlines a maturation pattern for areas of deep human inquiry that includes an adolescence of exciting discoveries, new formulas, and unusual predictions. As science has matured, our confidence in it has grown. We expect that science has answers, that its predictive powers are mostly accurate. But what happens when the science gets old? Oddly enough, it seems to have started trying to find the end of its own usefulness--its formulas "predict that there are things which they cannot predict, observations which cannot be made, statements whose truth they can neither affirm nor deny."

Barrow's book is a fairly tough read, delving into topics as varied as theology, art, mathematics, and cosmology in its quest to define impossibility. But for those who have noticed that, "Scientists seem no longer content merely to describe what they have done or what Nature is like; they are keen to tell their audience what their discoveries mean for an ever-widening range of deep philosophical questions," Impossibility is an intriguing look at the evolution of our thoughts on knowing everything. Without limits, there would be no science, and though our imaginations may roam freely through the realms of impossibility, we may find in the end that "what cannot be known is more revealing than what can." --Therese Littleton

John Barrow is Professor of Astronomy at the University of Sussex. Among his many popular books on science are Pi in the Sky, Theories of Everything, and The Origin of the Universe. He lives in Sussex, England

Shipping: US$ 8.50
From United Kingdom to U.S.A.
Destination, rates & speeds

3. Impossibility : The Limits of Science and the Science of Limits

4. Impossibility : The Limits of Science and the Science of Limits

5. Impossibility : The Limits of Science and the Science of Limits Barrow, John D.