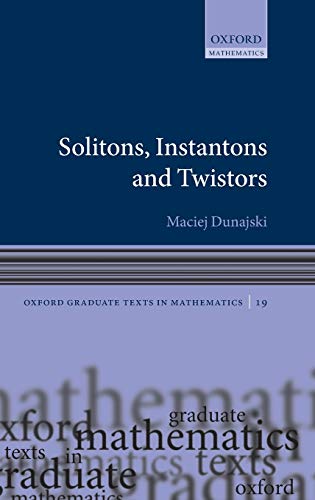 Most nonlinear differential equations arising in natural sciences admit chaotic behavior and cannot be solved analytically. Integrable systems lie on the other extreme. They possess regular, stable, and well behaved solutions known as solitons and instantons. These solutions play important roles in pure and applied mathematics as well as in theoretical physics where they describe configurations topologically different from vacuum. While integrable equations in lower space-time dimensions can be solved using the inverse scattering transform, the higher-dimensional examples of anti-self-dual Yang-Mills and Einstein equations require twistor theory. Both techniques rely on an ability to represent nonlinear equations as compatibility conditions for overdetermined systems of linear differential equations.

Maciej Dunajski read physics in Lodz, Poland and received a PhD in mathematics from Oxford University where he held a Senior Scholarship at Merton College. After spending four years as a lecturer in the Mathematical Institute in Oxford where he was a member of Roger Penrose's research group, he moved to Cambridge, where he holds a Fellowship and lectureship at Clare College and a Newton Trust Lectureship at the Department of Applied Mathematics and Theoretical Physics. Dunajski specialises in twistor theory and differential geometric approaches to integrability and solitons. He is married with two sons.

"While there are many exploratory texts on specific areas within the theory of integrable systems the area has lacked a general introduction to the field. The current text takes its inspriation from mathematical physics and field theory. It does whet the reader's appetite and provides an excellent first taste of what can be savoured in detail in more advanced monographs." -- Mathematical Reviews