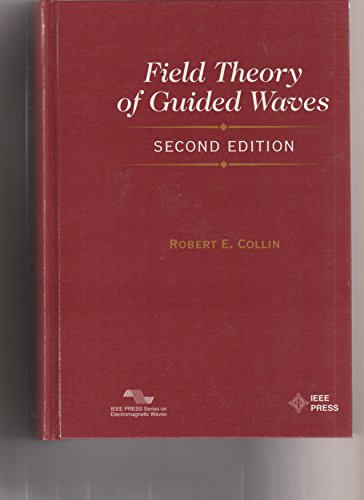 Electrical Engineering/Electromagnetics Field Theory of Guided Waves Second Edition A volume in the IEEE/OUP Series on Electromagnetic Wave Theory Donald G. Dudley, Series Editor Long considered the most comprehensive account of electromagnetic theory and analytical methods for solving waveguide and cavity problems, Field Theory of Guided Waves has been thoroughly revised and updated in this second edition. By introducing new subject areas and increasing coverage of others, the author has significantly enhanced the usefulness of this new edition. The method of presentation is clear and informative and new examples and problems greatly aid comprehension. This second edition also includes an important chapter on scalar and dyadic Green’s functions, which is essentially all new, as well as new material on layered media, microstrip lines, dielectric resonators, integral equations, and numerical solutions to reflect current geometrical configurations. About the series Formerly the IEEE Press Series on Electromagnetic Waves, this new joint series between IEEE Press and Oxford University Press offers even better coverage of the field, with new titles as well as reprintings and revisions of recognized classics that maintain long-term archival significance in electromagnetic waves and applications. Designed specifically for graduate students, practicing engineers, and researchers, this series provides affordable volumes that explore electromagnetic waves and applications beyond the undergraduate level.

About the author Robert E. Collin received the B.Sc. degree in engineering physics from the University of Saskatchewan in 1951. He attended Imperial College in England for graduate work and obtained the Ph.D. degree in electrical engineering from the University of London in 1954. From 1954 to 1958 he was a Scientific Officer at the Canadian Armament Research and Development Establishment, where he worked on missile guidance antennas, radomes, and radar systems evaluation. He joined the Electrical Engineering Department at Case Institute of Technology (now Case Western Reserve University), Cleveland, Ohio, in 1958. During his tenure there he has served as Chairman of the Electrical Engineering and Applied Physics Department for five years and also as Interim Dean of Engineering for two years. He is the author/co-author of more than 100 technical papers and several books, including Foundations for Microwave Engineering, Antennas and Radiowave Propagation, a co-author with R. Plonsey of Principles and Applications of Electromagnetic Fields, and a co-editor with F. Zucker and contributing author of Antenna Theory, Parts I and II. Professor Collin is a member of the National Academy of Engineering and a member of the IEEE Antennas and Propagation Society, the IEEE Microwave Theory and Techniques Society, and the USA Commission B of URSI. He is currently a member of the Administrative Committee of the IEEE Antennas and Propagation Society.