Items related to The Oxford Thesaurus 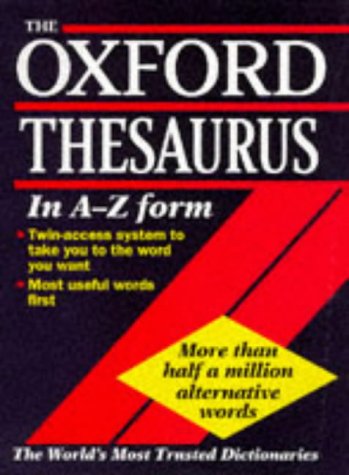 First published in 1991, the very successful first edition of The Oxford Thesaurus has now sold over 126,000 copies. This new edition (NB new format), which for the first time includes antonyms in the main A-Z text, along with many additional new synonyms, broadens the book's appeal still
further. The Oxford Thesaurus remains the most useful A-Z thesaurus available today, with more practical guidance for the user than any other competing title.

Around 350,000 synonyms and antonyms, covering general English as well as thousands of regional and idiomatic words and expressions, are listed in A-Z form for ease of reference. Generous and detailed labelling shows how to use synonyms, and example sentences throughout make it even easier to
select the correct synonym. The most useful synonyms (ie those that are closest in meaning to the headword) are listed first - a more helpful arrangement than a simple alphabetical listing under the headword.

If the word for which you seek an alternative is not to be found as a headword, you can simply turn to the synonym index which lists 265,000 synonyms and shows you under which headword each synonym is located. In addition, all synonyms which also have their own headword entry (at which further
related words may be found) are indicated by a simple cross-reference symbol.

On the first edition:

'handier than Roget both in being alphabetical and in offering example-sentences. The mot juste in just a mo.' Prof. Sir Randolph Quirk, The Observer.

Lawrence Urdang is a distinguished lexicographer and publisher, and has edited many major dictionaries and other reference books. He is also the Editor of Verbatim, The Language Quarterly.

Book Description Hardback. Condition: Good. The book has been read but remains in clean condition. All pages are intact and the cover is intact. Some minor wear to the spine. Seller Inventory # GOR001984713

Book Description Hardback. Condition: Very Good. The book has been read, but is in excellent condition. Pages are intact and not marred by notes or highlighting. The spine remains undamaged. Seller Inventory # GOR000981392

Book Description Oxford University Press, 1997. Hardcover. Condition: Used; Good. Dispatched, from the UK, within 48 hours of ordering. This book is in good condition but will show signs of previous ownership. Please expect some creasing to the spine and/or minor damage to the cover. Ripped/damaged jacket. The dust jacket of this book is slightly damaged/ripped, however, this does not affect the internal condition. Seller Inventory # CHL4145235

Book Description Oxford University Press, 1997. Condition: Good. This is an ex-library book and may have the usual library/used-book markings inside.This book has hardback covers. In good all round condition. Dust Jacket in good condition. Please note the Image in this listing is a stock photo and may not match the covers of the actual item,2150grams, ISBN:9780198600053. Seller Inventory # 6501154

Book Description -. Hardcover. Condition: Very Good. The Oxford Thesaurus This book is in very good condition and will be shipped within 24 hours of ordering. The cover may have some limited signs of wear but the pages are clean, intact and the spine remains undamaged. This book has clearly been well maintained and looked after thus far. Money back guarantee if you are not satisfied. See all our books here, order more than 1 book and get discounted shipping. Seller Inventory # 7719-9780198600053

Book Description Oxford University Press 31/10/1997, 1997. Condition: Very Good. Shipped within 24 hours from our UK warehouse. Clean, undamaged book with no damage to pages and minimal wear to the cover. Spine still tight, in very good condition. Remember if you are not happy, you are covered by our 100% money back guarantee. Seller Inventory # 6545-9780198600053

Book Description Oxford University Press 31/10/1997, 1997. Condition: Good. Will be shipped promptly from UK warehouse. Book is in good condition with no missing pages, no damage or soiling and tight spine. There may be some dog-eared pages showing previous use but overall a great book. Seller Inventory # 9053-9780198600053

Book Description Oxford University Press, 1997. Hardcover. Condition: Used; Good. **Simply Brit** Shipped with Premium postal service within 24 hours from the UK with impressive delivery time. We have dispatched from our book depository; items of good condition to over ten million satisfied customers worldwide. We are committed to providing you with reliable and efficient service at all times. Seller Inventory # 1203638

Shipping: US$ 6.23
From United Kingdom to U.S.A.
Destination, rates & speeds