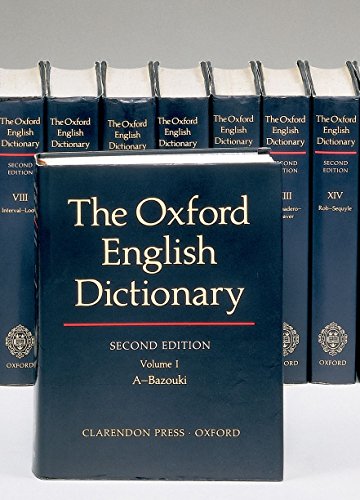 Originally published in fascicles starting in 1884 and completed in 1928, subsequently revised, expanded to 20 volumes, and adapted to the electronic age, the "OED has become the most venerated English language reference ever compiled. For those who use and love the language most intensely, the "OED has no peer. With more than 22,000 pages of definitions, nearly 2.5 illustrative quotations from writers as disparate as Geoffrey Chaucer and Erica Jong, William Shakespeare and Raymond Chandler, Charles Darwin and Quentin Tarantino, the OED is a dictionary like no other. Its entries offer the most authoritative definitions, detailed information on pronunciation, variant spellings throughout each word's history, extensive treatment of etymology, and details of area of usage and of any regional characteristics (including geographical origins). It is, as "Time observed, "a scholarly Everest."

The Oxford English Dictionary has long been considered the ultimate reference work in English lexicography. Compiled by the legendary editor James Murray and a staff of brilliant philologists and lexicographers (not to mention one homicidal maniac), the OED began as a a supplement to existing dictionaries, so that, as one lexicographer put it, "every word should be made to tell its own story." Enthusiastic readers sent Murray definitions and examples on identical slips of paper in response to a letter of appeal in 1879. By the time the last volume was published in 1928, the dictionary had swelled from 4 to 10 volumes containing over 400,000 entries. In the years since, the staff of the OED has continued to keep pace with our ever-evolving language, and today the dictionary weighs in at a whopping 20 volumes. The great joy of this dictionary lies in its extensive cross-references and word etymologies, which can run a full page or more. These features not only make the OED the most comprehensive and authoritative dictionary of the English language, but a delight to browse.

What writers like most about the Oxford English Dictionary

Book Description Oxford University Press, United Kingdom, 1989. Hardback. Condition: New. 2nd Revised edition. Language: English. Brand new Book. The 20-volume Oxford English Dictionary is the accepted authority on the evolution of the English language over the last millennium. It traces the usage of words through 2.4 million quotations from a wide range of international English language sources.The OED has a unique historical focus. Accompanying each definition is a chronologically arranged group of quotations that trace the usage of words, and show the contexts in which they can be used. The quotations are drawn from a huge variety of sources worldwide - literary, scholarly, technical, and popular - and represent authors as disparate as Geoffrey Chaucer and Erica Jong, William Shakespeare, Charles Darwin and Isabella Beeton.Other features distinguishing the entries in the Dictionary are authoritative definitions; detailed information on pronunciation using the International Phonetic Alphabet; listings of variant spellings used throughout each word's history; extensive treatment of etymology; and details of area of usage and of any regional characteristics.Alongside the print edition is the Oxford English Dictionary Online ). Updated quarterly, this award-winning online resource allows the Dictionary to evolve with the English language while the print edition remains as a historical record. Subscriptions are available to OED online on an individual or institutional basis. Visit /online/oed/ for details. Seller Inventory # AOP9780198611868