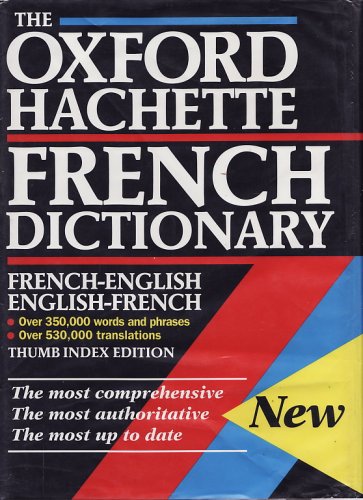 In The Oxford Hachette French Dictionary, two of the world's leading dictionary publishers have teamed to provide a groundbreaking new bilingual resource. Drawing on two ten-million-word databases of current French and English, The Oxford Hachette is a completely new work, offering a fresh approach to bilingual dictionaries. The result is a lexicon of unprecedented scope and utility, providing thoroughly up-to-date information on all aspects of French and English.
The Oxford Hachette is the product of an intensive research project by two expert teams of native speakers, one working in French and the other in English. Vocabulary, meaning, usage, and grammar have all been freshly reassessed to make this the most current and authoritative dictionary available today. Scientific, literary, and technical terminology--along with general and idiomatic vocabulary-- appear to a degree of completeness not found in any other bilingual dictionary. And extensive guidance to the way words and phrases are actually used make it as convenient as it is comprehensive. Here are just a few of the features that make The Oxford Hachette French Dictionary the finest French lexicon to date:

* More than 350,000 words and phrases--more than any other French dictionary
* Over 500,000 translations
* Thousands of sample sentences to illustrate meaning and usage
* Complete coverage of North American and European English and French
* Extended treatment of grammatically complex words
* Usage boxes that address nationalities, sports, forms of address, and more
* Ninety pages of guidance to self-expression in each language --from letter-writing to colloquial speech to advertising
* Numerous appendices on national governments the European community, and more

Many bilingual French dictionaries available today are largely based on aging volumes, with a few new words added to decades-old entries. The Oxford Hachette French Dictionary marks a dramatic new entry in the field, providing a completely new lexicon of French and English as actually spoken and written in today's world.

About the Editors:
Marie-Hélène Corréard and Valerie Grundy are highly experienced bilingual lexicographers who led project teams of French and English speakers in creating this dictionary.