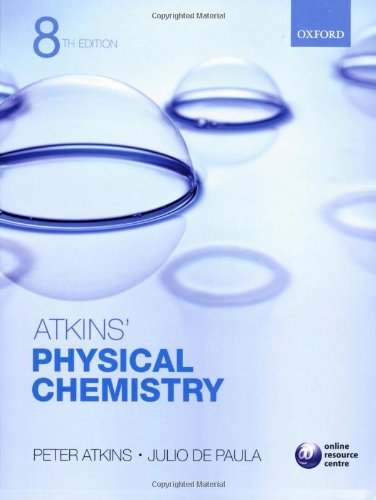 Peter Atkins is professor of chemistry at the University of Oxford and fellow of Lincoln College, where he is tutor in physical chemistry. After graduating from the University of Leicester, he was a Harkness Fellow of the Commonwealth Fund, which he spent at the University of California, Los Angeles, and then took up his current position at Oxford in 1965. He was awarded the Meldola Medal by the Royal Society of Chemistry in 1969 and was Nyholm Lecturer in 1999. He sits on the Physical Chemistry Division Committee of IUPAC and is a member of IUPAC's Committee on the Teaching of Chemistry. Julio de Paula is professor of chemistry at Haverford College, where he teaches general chemistry, physical chemistry, and biophysical chemistry, and conducts research in photochemistry and photobiology. After obtaining a doctorate in chemistry from Yale University, he was a National Institutes of Health Postdoctoral Fellow at Michigan State University, and then took up his current position at Haverford in 1989. He was awarded a Henry Dreyfus Teacher-Scholar Award in 1998. .

`Review from previous edition "... it is not possible ... to write a review of textbooks in physical chemistry without making a comparison with the market leader in the field, Physical Chemistry by Peter Atkins."' THES March 2001

`"I am still the proud owner of a first edition of Physical Chemistry, which I bought in 1979 just after it was first published, in the third year of my chemistry course...I believe this book achieves a good balance between coverage and detail while still retaining a reasonable size...invaluable guide to physical chemistry both for teachers and students. If you are only going to own one physical chemistry textbook then this has to be the one."' Jeremy G. Frey/Education in Chemistry May 1999