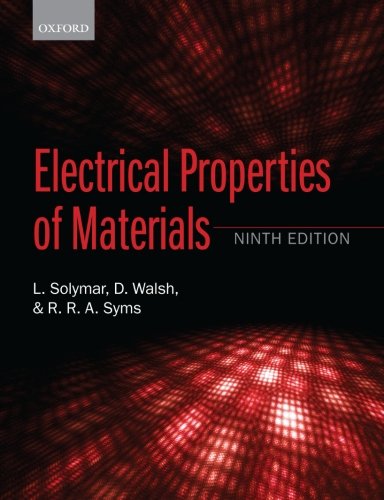 An informal and highly accessible writing style, a simple treatment of mathematics, and clear guide to applications have made this book a classic text in electrical and electronic engineering. Students will find it both readable and comprehensive. The fundamental ideas relevant to the understanding of the electrical properties of materials are emphasized; in addition, topics are selected in order to explain the operation of devices having applications (or possible future applications) in engineering. The mathematics, kept deliberately to a minimum, is well within the grasp of a second-year student. This is achieved by choosing the simplest model that can display the essential properties of a phenomenom, and then examining the difference between the ideal and the actual behaviour.
The whole text is designed as an undergraduate course. However most individual sections are self contained and can be used as background reading in graduate courses, and for interested persons who want to explore advances in microelectronics, lasers, nanotechnology, and several other topics that impinge on modern life.

To request a copy of the Solutions Manual, visit http://global.oup.com/uk/academic/physics/admin/solutions.

Laszlo Solymar was born in 1930 in Budapest. He is Emeritus Professor of Applied Electromagnetism at the University of Oxford and Visiting Professor and Senior Research Fellow at Imperial College, London. He graduated from the Technical University of Budapest in 1952 and received the equivalent of a PhD in 1956 from the Hungarian Academy of Sciences. In 1956 he settled in England where he worked first in industry and later at the University of Oxford. He did research on antennas, microwaves, superconductors, holographic gratings, photorefractive materials, and metamaterials. He has held visiting professorships at the Universities of Paris, Copenhagen, Osnabruck, Berlin, Madrid, Budapest, and since 2000 Imperial College, London. He published 8 books and over 250 papers. He has been a Fellow of the Royal Society since 1995. He received the Faraday Medal of the Institution of Electrical Engineers in 1992.

Donald Walsh is an Emeritus fellow of Oriel College, Oxford. He first worked for about seven years at the Mullard Radio Valve Co, developing photo cells and flash tubes, then for about the same period at the Services Electronics Research Labs (SERL) on travelling wave tubes, klystrons and TR switches. He came to the Department of Engineering Science, Oxford in 1956 as a research fellow to help the newly appointed Reader in Electrical Engineering start a research group in microwave electronics, and later became a lecturer and college fellow.

Richard R. A. Syms has been Head of the Optical and Semiconductor Devices Group in the EEE Department, Imperial College London, since 1992 and Professor of Microsystems Technology since 1996. He graduated in Engineering Science at Oxford University in 1979, and obtained a DPhil in 1982, also from Oxford. He carried out postgraduate work at University College London, Oxford University, and the Rutherford Appleton Laboratory before moving to Imperial. He has published around 180 journal papers, 100 conference papers and 2 books on holography, guided wave optics, electromagnetic theory, metamaterials, magnetic resonance imaging, and micro-electro-mechanical systems (MEMS), and has 18 granted patents. In 2001, he co-founded the Imperial College spin-out company Microsaic Systems. He is an Associate Editor for the Journal of Microelectromechanical Systems. He is a Fellow of the Royal Academy of Engineering, the Institute of Physics, and the Institute of Electrical Engineers.

Review from previous edition: "This book is a delight! It is impossible to read it without a smile coming to your lips every few pages. It is a new edition of a well-known undergraduate text, intended for students of electrical engineering, but I am sure any physics student could benefit from
reading it ... It is an excellent educational book, and I am sure that it will achieve the aim of the authors, which is to instill a sense of quantum mechanical reasoning into all its readers."
--High Temperatures - High Pressures

"An informal and highly accessible writing style, a simple treatment of mathematics, and a clear guide to applications have made this book a classic text in electrical and electronic engineering. Students will find it both readable and comprehensive."
--European Journal of Engineering Education