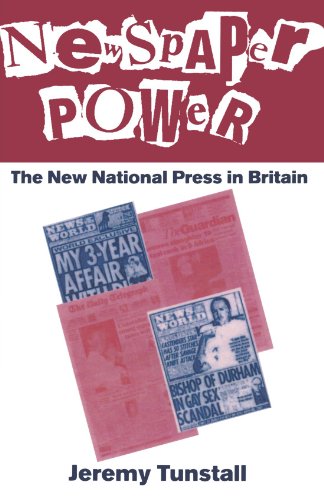 This book examines British national newspapers after the 1986 "Death of Fleet Street" triggered by Rupert Murdoch. Since then competition has intensified with more titles, fatter papers, more sections, and aggressive marketing. All areas of journalism--from sport to politics--have been transformed. A star system has developed for columnist and there is now a bigger and more powerful top echelon of senior executives, star writers, and section heads. The Editor has taken on a newly dominant role as impresario and entrepreneur.

Newspaper Power is based on 200 interviews with senior newspaper people in the 1990s. Jeremy Tunstall also studied pre-Murdoch Fleet Street and he makes illuminating comparisons between the 1960s and the 1990s.

The author argues that it is the newspapers (not television) which define political crises and severely wound Prime Ministers; that the broadsheets have increasingly regarded finance as the new core of serious journalism; and that the tabloids have re-defined the British monarchy as soap opera. He also analyzes the control over policy-making for the press, broadcasting, and cross-media ownership, which is exercised by the Prime Minister in consultation with the press. The book provides a valuable introduction to the national Press of our time and the issues that surround current and recent British journalism.

Jeremy Tunstall is Professor of Sociology at City University, London.

"[A] sweeping, insightful study....Rarely is a work of such scope and sweep so rich in precision and detail."--Choice

"Newspaper Power is a magisterial work in the field of media studies. Every country deserves to have a comparable volume. The British are fortunate to have had a Jeremy Tunstall."--Stephen Hess, The Brookings Institution
"Tunstall's comparative study is most valuable for the light it sheds on the link between the ruthless pursuit of profit on the one hand and the increasingly enclosed nature of journalism on the other."--London Review of Books