Items related to William and Dorothy Wordsworth: 'All in each other'

Newlyn, Lucy William and Dorothy Wordsworth: 'All in each other'

William and Dorothy Wordsworth: 'All in each other' 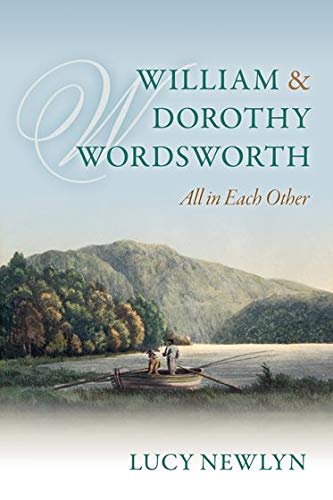 William Wordsworth's iconic relationship with his 'beloved Sister' spanned nearly fifty years. Separated after the death of their mother when Dorothy was six, and reunited as orphans after the death of their father, they became inseparable companions. This is the first literary biography to give each sibling the same level of detailed attention; with Dorothy's writings set fully alongside her brother's, we see her to be the poet's equal in a literary partnership of outstanding importance. But Newlyn shows that writing was just one element of their lifelong work to re-build their family and re-claim their communal identity; walking, talking, remembering, and grieving were just as important. This rich and holistic account celebrates the importance of mental and spiritual health, human relationships, and the environment.

Lucy Newlyn was born in Uganda, grew up in Leeds, and read English at Lady Margaret Hall, Oxford. She is now Professor of English Language and Literature at Oxford University, and a Fellow of St Edmund Hall. She has published widely on English Romantic Literature, including three books with Oxford University Press, and The Cambridge Companion to Coleridge. Her book Reading Writing and Romanticism: The Anxiety of Reception won the British Academy's Rose Mary Crawshay prize in 2001. More recently she has been working on the prose writings of Edward Thomas. Together with Guy Cuthbertson she edited Branch-Lines: Edward Thomas and Contemporary Poetry, as well as England and Wales, a volume in the ongoing OUP edition of Thomas's prose. Married with a daughter and two step-children, Lucy Newlyn lives in Oxford. Ginnel, her first collection of poetry, was published in 2005: she is currently working on her second.

Oxford professor Newlyn (Reading Writing and Romanticism) investigates the lifelong creative collaboration between the poet William Wordsworth and his sister Dorothy. After the early death of their parents, Dorothy and William grew up almost entirely apart. But after reuniting on the cusp of adulthood, they lived together for their entire lives, with Dorothy joining William's household until the end. Best known today for her lyrical journals recording travels with her brother, Dorothy was central to William's creative process, to the extent that William called her one of the two Beings to whom my intellect is most indebted. Newlyn argues for seeing much of Wordsworth's poetry as a kind of gift-exchange with his sister, asserting the therapeutic value of their creative community in overcoming early bereavement and poverty. Dorothy's prose and William's poetry were reparative, Newlyn claims, as the two cultivated shared memories, community, and an enduring bond with their environment. Along with close readings of their respective works, Newlyn provides useful contextual detours into theories of gift economy, 18th-century medicine and nostalgia, as well as themes in critical theory and eco-criticism. Though the book's level of detail is best suited to specialists, Newlyn offers a valuable corrective to existing Wordsworth criticism and a moving testimonial to the power of creativity and community. 8-page b&w plate section. (Dec.)

1. William and Dorothy Wordsworth : All in Each Other

2. William and Dorothy Wordsworth: 'All in each other' (Paperback)

Book Description Oxford University Press, United Kingdom, 2016. Paperback. Condition: New. Reprint. Language: English. Brand new Book. William Wordsworth's creative collaboration with his 'beloved Sister' spanned nearly fifty years, from their first reunion in 1787 until her premature decline in 1835. Rumours of incest have surrounded the siblings since the 19th century, but Lucy Newlyn sees their cohabitation as an expression of deep emotional need, arising from circumstances peculiar to their family history. Born in Cockermouth and parted when Dorothy was six by the death of their mother, thesiblings grew up separately and were only reunited four years after their father had died, leaving them destitute. How did their orphaned consciousness shape their understanding of each other? What part did traumatic memories of separation play in their longing for a home? How fully did theirre-settlement in the Lake District recompense them for the loss of a shared childhood?Newlyn shows how William and Dorothy's writings - closely intertwined with their regional affiliations - were part of the lifelong work of jointly re-building their family and re-claiming their communal identity. Walking, talking, remembering, and grieving were as important to their companionship as writing; and at every stage of their adult lives they drew nourishment from their immediate surroundings. This is the first book to bring the full range of Dorothy's writings into the foreground alongside her brother's, and to give each sibling the same level of detailed attention. Newlyn explores the symbiotic nature of their creative processes through close reading of journals, letters and poems - sometimes drawing on material that is in manuscript. She uncovers detailed interminglings in their work, approaching these as evidence of their deep affinity. The book offers a spirited rebuttal of themyth that the Romantic writer was a 'solitary genius', and that William Wordsworth was a poet of the 'egotistical sublime' - arguing instead that he was a poet of community, 'carrying everywhere with him relationship and love'. Dorothy is not presented as an undervalued or exploited member of theWordsworth household, but as the poet's equal in a literary partnership of outstanding importance.Newlyn's book is deeply researched, drawing on a wide range of recent scholarship - not just in Romantic studies, but in psychology, literary theory, anthropology and life-writing. Yet it is a personal book, written with passion by a scholar-poet and intended to be of some practical use and inspirational value to non-specialist readers. Adopting a holistic approach to mental and spiritual health, human relationships, and the environment, Newlyn provides a timely reminder that creativitythrives best in a gift economy. Seller Inventory # AOP9780198728146

5. William and Dorothy Wordsworth : All in Each Other

7. William and Dorothy Wordsworth: 'All in each other'

8. William and Dorothy Wordsworth: 'All in each other'

9. William and Dorothy Wordsworth: 'All in each other'

10. William and Dorothy Wordsworth: 'All in each other'

Shipping: US$ 16.22
From United Kingdom to U.S.A.
Destination, rates & speeds